This is a good one. Based on his terrific screenplays for Sicario (2015) and Hell or High Water (2016), I was more than ready for Taylor Sheridan’s Wind River. It does not disappoint. After seeing Wind River on opening day last Friday, I knew I wanted to write about it, so I saw it again on Monday. I didn’t want to miss anything, but mainly I just wanted to see it again. The film was as strong or even stronger on a second viewing. Wind River was directed by Sheridan as well as written, and it’s an incredibly assured piece of work.

Jeremy Renner plays Cory Lambert, a US Fish and Wildlife Service officer in Wyoming. While tracking mountain lions that have been killing cattle on the Wind River Indian Reservation, Cory finds a barefoot body of a young woman in the snow. Elizabeth Olson plays Jane Banner, an FBI agent sent in to investigate, since this is a homicide committed on federal land. Arriving from Las Vegas on short notice in the midst of a heavy snow storm, Jane is clearly out of her element.

But Jane is smart and adaptive, and enlists Cory to help uncover the truth of what happened. Cory is a tracker and a hunter. This is what he does. He tells Jane he hunts predators. She says so help me find who did this. Taylor Sheridan said in an interview that Cory and Jane are hunting rather than investigating.

Cory knew the victim, Natalie Hanson, just as he knows most of the people living on the reservation. At the beginning of Wind River we meet Cory’s ex-wife, Wilma, a Native American, and their son, Casey. Their deceased daughter Emily was Natalie’s best friend. Emily’s demise, which we learn about over time, makes the current case very personal for Cory.

There’s a strong sense of family and community in this film. An on-screen title at the beginning reads: “Inspired by actual events.” Wind River Indian Reservation is a real place that has been plagued by violence and crime. A 2012 article in the New York Times discusses this. In particular, the death of Marisa Spoonhunter in 2010, as described in the Times article, seems an inspiration, if that’s the right word, for the story Sheridan tells here. An on-screen title just before the end credits furthers the documentary aspect of the film: “While missing person statistics are complied for every other demographic, none exist for Native American women. No one knows how many are missing.”

On the most immediate level, Wind River is an engaging crime thriller, and like Sicario and Hell or High Water, it’s a modern Western. But it uses the genre to get at something deeper. Sheridan calls these films a trilogy, which feels right. The weight of history — specifically Native American history — hangs over Wind River. This is felt in the behavior of the characters and the overall tone of the film. It’s most particularly felt in the way the Native characters react to yet more tragedy. As Natalie’s grieving father Martin says to Cory, “I’m tired of fighting this life.”

Sheridan says that as a white director telling a story with two white protagonists in a film about Native Americans, he wanted to be very careful to be respectful of the Native people and their culture, and to be as authentic as possible. A tribally owned enterprise, Acacia Entertainment, provided funding for 90% of Wind River’s budget. It was important to Sheridan to honor the trust that came with that investment.

Taylor Sheridan, who was an actor on the FX series Sons of Anarchy, is first and foremost a screenwriter. His dialogue is great; there’s nothing rote or predictable about it. The conversations between Jeff Bridges and Gil Birmingham in Hell or High Water felt totally authentic and unique to the characters, and that’s true here as well. I hadn’t intended on taking notes the first time I saw Wind River, but this exchange between Cory and his father-in-law, Dan Crowheart, early in the film made me scramble for pen and paper. Cory tells Dan that Wilma, Cory’s ex-wife, is interviewing for a job in Jackson Hole. Dan says, “Going to live among the millionaires,” to which Cory replies that billionaires have pushed out the millionaires.” And Dan says, “Hang on to your money, because when the wolves start eating their golden retrievers, the land will go for pennies on the dollar.” The choice of “golden retrievers” is just great, takes it to another level.

Here are some others that got my attention:

Cory to his son Casey after he comes downstairs holding a BB gun carelessly pointed in Cory’s direction: “The gun is always loaded, even if it ain’t.”

Jane and Ben, the Tribal Police chief, played by the great Graham Greene, are approaching a trailer where a suspect is said to live. Jane says, “Shouldn’t we wait for backup?” Ben replies, “This isn’t the land of backup, Jane. This is the land of you’re on your own.”

And these key lines, delivered by Cory to Jane after she’s said she was lucky to have survived a life-and-death encounter: “Luck lives in the city. Luck don’t live out here.”

As much as I love his writing, I don’t want to discount Sheridan’s skill as a director. There’s a shootout in Wind River that’s as well-staged and edited as any I’ve ever seen. The buildup to that is extremely tense. It’s anxious anticipation on a razor’s edge. This is exciting, for sure, but it takes something out of you watching it. And I always knew where I was geographically within scenes in the film throughout. That’s not always true in a lot of films.

The performances are all very strong. In addition to Jeremy Renner, Elizabeth Olson, and Graham Greene, Gil Birmingham plays Natalie’s father and Cory’s friend, Martin. He was a standout as Jeff Bridges’ partner in Hell or High Water. The music score is by Nick Cave and Warren Ellis, who also did the score for Hell or High Water. I don’t really remember their score for Wind River, which I think is a sign of how good it is. ** Update: Even though I wrote here that I didn’t remember the score the first two times I saw the film, it definitely registered when I saw Wind River for a third time last November at the Museum of Modern Art. I love the music; it reminds me very much of the score for Sicario, discordant and unsettling.

Wind River may not be quite as complete as Hell or High Water, but it’s close. I would like to have known the fate of one of the characters, but unless I have the chance to ask the director at some point, I’ll just have to live with it. I have a couple of other minor quibbles, but I’m willing to put those on the shelf because I like the film so much. Wind River is sad and mournful, and full of feeling, but by the end the characters have gained a measure of understanding and acceptance, despite the loss, or perhaps because of it. – Ted Hicks

Here are two trailers for Wind River. There’s some overlap, but I think the differences make them both worth seeing.

An interview with actor Gil Birmingham re Wind River can be accessed here.

A review of Wind River in the Native American publication, Indian Country Today, can be accessed here.

My previous post on Sicario can be accessed here.

My previous post on Hell or High Water can be accessed here. 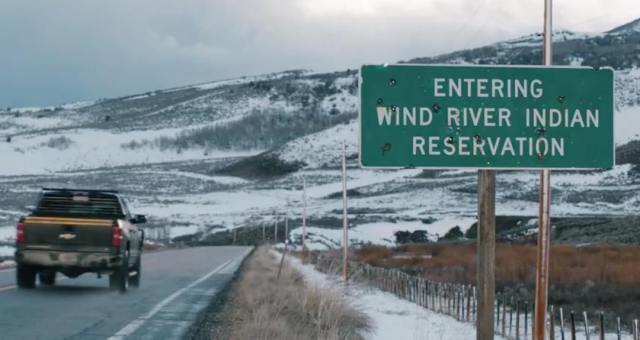