Hell or High Water is one of the best films of the year so far. I’ve seen it twice in one week, drawn back by the excellence of the filmmaking, writing, and performances — the whole package. I anticipated the pleasure of seeing it again and was not disappointed. I don’t think there’s a false moment in the film; it feels just about perfect.

Set on the sun-burnt plains of West Texas, Hell or High Water, directed by David Mackenzie, is a modern-day Western that tells the story of two brothers who rob banks and the two Texas rangers on their trail. The brothers need to raise enough money to pay off the mortgage on their late mother’s ranch before the bank can foreclose. Oil has been found on the property, so there’s a lot more at stake than just losing the family home. Banks and the economy are the villains here; we see signs of hard times everywhere. This is a world of foreclosures and bad debt, which has echoes of Margin Call (2011), 99 Homes (2014), The Big Short (2015). It also calls to mind Bonnie and Clyde (1967).

As I mentioned above, much of the strength of this film comes from the writing and especially the performances. Hell or High Water was written by Taylor Sheridan, who wrote Sicario (2015), a killer of a film. I did a blog post about Sicario last year, which can be accessed here. 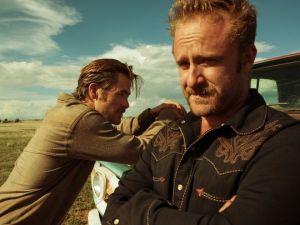 The younger brother, Toby Howard, is played by Chris Pine. He’s a revelation here for those who know him from roles such as the new Captain Kirk in the rebooted Star Trek films, Jack Ryan in Jack Ryan: Shadow Recruit (2014), or as Cinderella’s Prince in Into the Woods (2014). Pine is an appealing, likable actor. He was fine in those films, but he’s doing something here that feels very real. Toby is weathered, beaten down, weary, vulnerable, and tough. He’s divorced, with two sons who live with their mother. As Toby says later in the film, he’s been poor all his life, and his parents and their parents before them. He wants to make sure the cycle of generational poverty is not passed down to his boys. Ben Foster plays Toby’s older brother Tanner with the committed intensity he’s brought to performances in films such as Hostage (2005), The Messenger (2009), the remake of 3:10 to Yuma (2007), and on HBO’s Six Feet Under (2003-2005). Tanner, an ex-con, is short-fused, impulsive, and loyal. It’s the level-headed Toby who comes up with the desperate plan to hit a series of small banks, and Tanner who makes it happen. For Toby it’s about justice; for Tanner it’s about the rush. 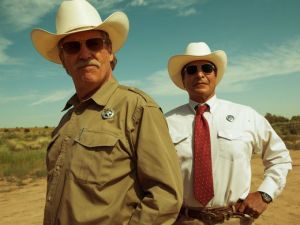 On the other side are Texas Rangers Marcus Hamilton (Jeff Bridges) and his partner, Alberto Parker (Gil Birmingham). I think everybody loves Jeff Bridges. He’s a national treasure with an awesome acting career that includes his iconic role as the Dude in The Big Lebowski (1998), Crazy Heart (2009), Starman (1984), Cutter’s Way (1981), Hearts of the West (1975), and Fat City (1972), to name but a few. It’s a long list. Bridges brings a lived-in authenticity to his character here. In fact, it doesn’t feel like he’s acting; it’s more natural than that. That holds true for all the performances in this film. Authentic, natural, and real are words that keep coming to mind when I think about Hell or High Water. The relationship between Marcus and his partner is like that of an old married couple, or old friends continually trading genial insults. Gil Birmingham plays Alberto, a Native American. The actor looked familiar to me. I couldn’t place him at first, but then discovered he has a recurring role on the Netflix series, Unbreakable Kimmie Schmidt, and was also on the second season of House of Cards. The two actors are very relaxed with each other and have great rapport. Marcus is also reminiscent of the Tommy Lee Jones character in No Country for Old Men (2007). Speaking of which, Hell or High Water might seem like Cormac McCarthy territory, though its worldview is not quite as merciless.

There’s something sad and mournful about these people and their situations that reminds me at times of moments in Sam Peckinpah’s Pat Garrett and Billy the Kid (1973). The score by Nick Cave and Warren Ellis reinforces this feeling. 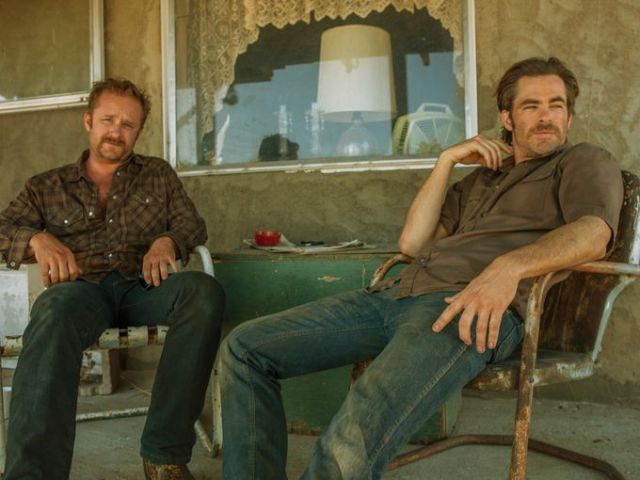 Hell or High Water is relaxed and laid-back, until it’s not. It’s easy-going, like a Joe Ely song. A lot of time is spent on porches, usually with the sun coming up or going down, and people just talking (or not). When it comes, violence is hard, sudden, and real. There’s a sequence during a robbery that comments on American gun culture. The bank is more crowded than Toby and Tanner expected, and they get more than they’d bargained for. Thanks to conceal-carry permits, a lot of the bank’s customers have guns and don’t hesitate to use them. Toby and Tanner barely get away with seemingly half the town blasting at them in the parking lot. It’s a pretty funny moment.

If you haven’t already seen Hell or High Water, I strongly recommend that you do. It’s solid and satisfying. You won’t be disappointed. — Ted Hicks

3 Responses to “Hell or High Water” – The Real Deal