In the last ten to twenty years, in addition to informing us in a journalistic sense, the best documentaries have been artistic expressions in their own right. The ones I’ve seen lately have been outstanding, uplifting, deeply moving, and extremely well made. Here they are:

Eva Hesse (Marcie Begleiter, director)  I’d never heard of Eva Hesse before seeing this film, but despite my ignorance, it turns out she’s an important figure in the art world. In the photographs and archival footage we see, she seems unassuming, smaller than life, yet she created amazing work. This film makes me want to know about her and her art.

Francofonia (Alexander Sokurov, director)  Sokurov is probably best known in this country for Russian Ark (2002), a time-travelling wonder set in the Hermitage Museum in St. Petersburg, famously shot in a single, 99-minute take. It’s amazing. But the first of his films I saw was Mother and Son (1997), a slow-moving but far from boring film comprised of long takes in which virtually nothing happens on screen, but it’s mesmerizing all the same. Francofonia isn’t easy to pin down; it’s a mix of fact and fiction, history and imagination, with the Nazi occupation of Paris during World War II and art works from the Louvre at the center. There’s something very moving about it that’s hard to describe.

The Music of Strangers: Yo-Yo Ma and the Silk Road Ensemble (Morgan Neville, director)  Neville has a strong resumé; his previous films include Best of Enemies (2015) and the Oscar-winning 20 Feet from Stardom (2013). The Music of Strangers is just wonderful. The music is rapturous and transporting. The musicians profiled in the film come off as genuinely solid, firmly grounded people. They include Kayhan Kalhor of Iran, Wu Man of China, the awesome Cristina Pato of Galicia in Spain, and Kinan Azmeh of Syria. As Wu Man says at one point, “There’s no East or West, it’s just a globe.” The Music of Strangers opens in New York and Los Angeles on June 10; nationwide in June/July.

Nothing Left Unsaid: Gloria Vanderbilt and Anderson Cooper (Liz Garbus, director)  Garbus has had a long, impressive career. Last year she gave us the extraordinary What Happened, Miss Simone?, and years before the equally strong The Farm: Inside Angola Prison (1997), both of which are available for streaming on Netflix. Nothing Left Unsaid (great title) is sharp, witty, and powerful. Gloria Vanderbilt, who I knew little about other than her name and her line of jeans, has had an amazing life. She was married to Leopold Stokowski (!) and Sidney Lumet (news to me). Her last husband, Wyatt Emory Cooper, who died in 1978, was Anderson’s father. Gloria is 92 and sharp as a tack. Her relationship with Anderson is beautiful to see. Besides being mother and son, they seem to be really good friends. My friend Judith Trojan wrote perceptively about the film on her blog, FrontRowCenter, when it was first shown on HBO this past April. You can read that here.

Presenting Princess Shaw (Ido Haar, director)  This film is a rush of positive energy. Samantha Montgomery, aka Princess Shaw, lives in New Orleans where she cares for the elderly at an assisted living facility during the day and posts her songs on YouTube at night. Ophir Kutiel, aka Kutiman, is a musician who lives in Israel and creates new compositions from musical clips he finds on YouTube. The film shows how he uses Princess Shaw’s music and the profound impact this has on her life when he releases it on the Internet. Presenting Princess Shaw is available for streaming on Amazon. 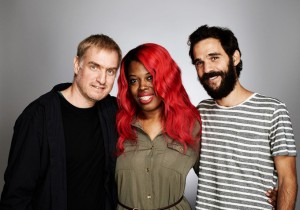 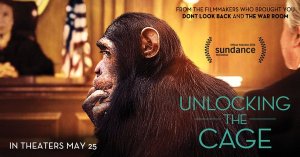 Unlocking the Cage (Chris Hegedus & D.A. Pennebaker, directors)  We saw this at Film Forum last weekend. Hegedus, Pennebaker, and animal-rights lawyer Steven Wise, founder of the Nonhuman Rights Project, were there for a Q&A. Wise has been working for years to get chimpanzees legally recognized as persons. Per a description at Film Forum’s website, “It’s Wise’s unorthodox position that cognitively complex animals (e.g. chimpanzees, whales, dolphins, elephants) should be granted personhood rights that would protect them from abuse.” The film is extremely dramatic. It feels like it’s happening in the moment. 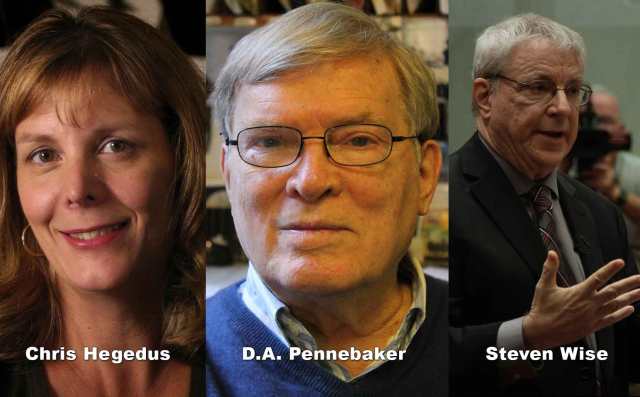 Three years ago I posted a piece on my blog about Pennebaker and Bob Dylan, which you can access here. 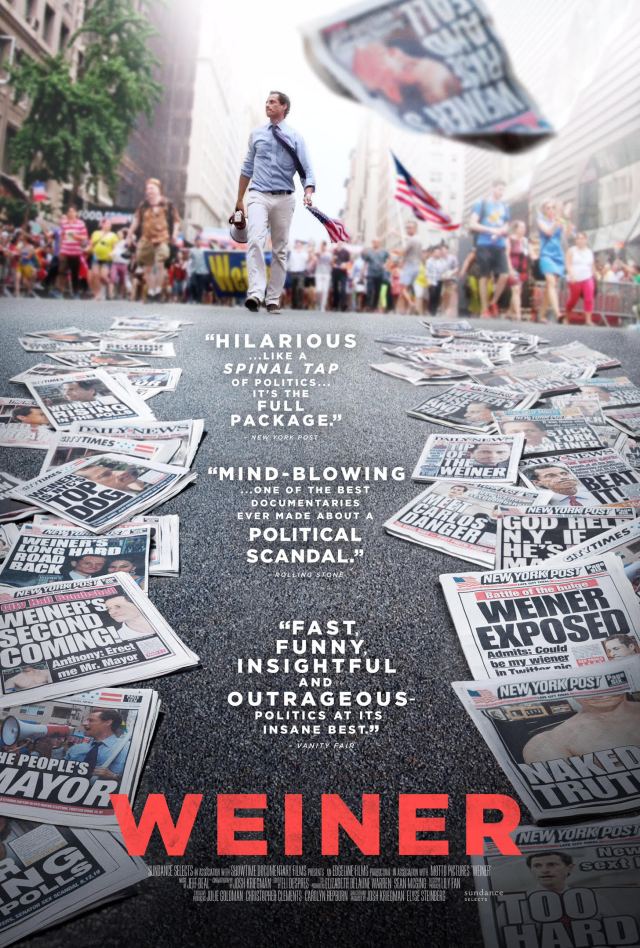 Weiner (Josh Kriegman & Elyse Steinberg, directors)  I suspect that Anthony Weiner now regrets giving Kriegman and Steinberg as much access as he did for the making of this film. I’ve read that Weiner still hasn’t seen it, which is too bad, because he might learn something about himself. Weiner is an extraordinary film, stunning at times. The tragedy of it is that if Weiner didn’t have a weird sex addiction — albeit one that doesn’t involve actual physical contact with another person — he could have been a strong politician, an impassioned guy fighting for the right causes. Throughout we see his wife, a mainly silent Huma Abedin, who does not look amused, standing by his side. It’s hard not to think of Alicia Florrick on The Good Wife. Seeing Weiner is like watching a trainwreck at times. He makes one bad decision after another, but just keeps plowing forward. In spite of everything, I find it hard not to like Anthony Weiner. I’m just glad I’m not him. 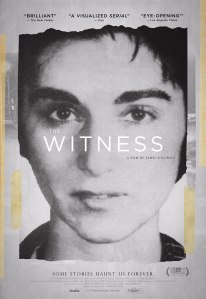 The Witness (James Solomon, director)  After Kitty Genovese was murdered on a New York street in her neighborhood in 1964, the story by A. M. Rosenthal that appeared in the New York Times stated that thirty-eight residents had witnessed the multiple attacks on Kitty from their apartments and did nothing, despite her screams for help. This quickly became the accepted version, written in stone. Rosenthal, interviewed in the film, sticks by the story. Kitty Genovese became the symbol of urban apathy, specifically in New York City. This extraordinary film follows Kitty’s younger brother, Bill Genovese, in his efforts to learn more about who his sister was and what really happened that night, a quest that consumed him for years. What emerges is a major revision of the original story. Bill tracks down and interviews as many of the original witnesses as he can. He lost his legs in Vietnam, and if anything, this makes Bill seem that much more determined. The film plays out like a thriller of the highest order. Near the end, Bill hires a young actress to go on the street late one night where the original attack occurred and scream as Kitty did that night. This will have you clawing the armrests. The Witness is a gripping detective story. I think Bill Genovese is the true witness of the title.

From This Day Forward (Sharon Shattuck, director)  We saw this film last year at the Full Frame Documentary Film Festival in Durham, North Carolina. It was subsequently shown at eight film festivals in 2015 but I couldn’t understand why it didn’t get either a theatrical or television release, because its transgender subject matter couldn’t be more topical. So I was happy to learn that From This Day Forward will open at the IFC Center in New York and elsewhere on June 24. It will then air on the PBS series POV this October 10. I included From This Day Forward on my list of favorite documentaries for 2015. You can access that post here.

Lo and Behold: Reveries of the Connected World (Werner Herzog, director)  The latest film from Werner Herzog is a fascinating look at the pervasive world of the Internet, from its beginnings to what it might become. Herzog brings the same sense of inquiry and wonder to Lo and Behold that he has to his previous films, which include Grizzly Man (2005) and Cave of Forgotten Dreams (2010). While I love many of his narrative films, especially Aguirre, The Wrath of God (1972), I think overall his best work has been done in documentaries. Lo and Behold has its New York premiere at the BAM CinemaFest in Brooklyn on June 19, and opens in theaters and on demand on August 19. I plan to write more about it then.

Here is a clip of Werner Herzog and executive producer Jim McNiel interviewed by Steve Zeitchik of the Los Angeles Times at the Sundance Film Festival, where Lo and Behold had its world premiere in January . Herzog, an original thinker if there ever was one, is such a kick to listen to.

Finally, here’s a link to an IMDB listing of the top 100 documentaries from 2000 to 2014. I didn’t see Frederick Wiseman, D.A. Pennebaker, or Al Maysles on this list — major omissions — but these are excellent choices for the most part. It gives you an idea of how many terrific documentaries are out there. – Ted Hicks