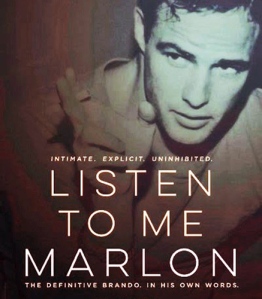 It was a great year for documentaries. Listen to Me Marlon is my personal favorite, but the others on my list are equally  strong in a variety of ways, and very human.

Amy (Asif Kapadia, director)  I don’t think I’d ever heard any of Amy Winehouse’s music before seeing this film. My awareness was limited to her downward spiral. When I finally heard her voice and the songs she wrote, I was seriously staggered. She had an amazing talent, raw and almost supernatural. What happened to her was a tragedy of self-destruction, aided, abetted, and enabled by her father, Mitch, and her husband, Blake Fielder-Civil. They are the villains of the story, per the persuasive evidence  by the film. No one was there to take care of Amy. I’d seen the director’s previous film, Senna (2010), about Ayrton Senna, the Brazilian Formula One race car driver who was killed on the track in 1994 at age 34. I know very little about Formula One racing and had never heard of Senna, but it was masterful film that drew me in completely. Amy had the same effect. I especially liked the sequence in a studio where she’s recording a duet with Tony Bennett. Winehouse seems fragile and insecure, but Bennett is caring and gentle with her, which is very moving. (Amy is available for streaming on Amazon.)

Cartoonists: Foot Soldiers of Democracy (Stéphanie Valloatto, director)  I saw this last January at a Film Society of Lincoln Center screening at the Walter Reade Theater,  a little over two weeks after two gunmen armed with assault rifles entered the offices of Charlie Hedbo in Paris and murdered eleven people, wounding eleven more. This made the subject of the film, which is about political cartoonists and freedom of speech, all the more on point. As far as I know, Cartoonists does not yet have a distributor in this country. This is inexplicable, since it couldn’t be any more topical on several levels. Hopefully it will eventually be picked up for distribution in theaters or on television.

Here is a link to the Film Society’s description of the film and a list of the heroic twelve cartoonists from around the world who are profiled: http://www.filmlinc.com/blog/entry/the-film-society-and-french-embassy-to-premiere-cartoonists-foot-soldiers-o

Dior and I (Frédéric Tcheng, director)  With what seems like total behind-the-scenes access, director Frédéric Tcheng follows Raf Simons as he settles in as the new artistic director for the Christian Dior fashion house in Paris. Simons has eight weeks to design a haute couture collection to be shown that spring (2012). This would normally take several months to prepare. The film finds a lot of drama in the countdown to Raf’s debut. It’s fascinating, exciting, and extremely well-made. (Dior is available for streaming on Netflix.)

Everything Is Copy (Jacob Bernstein, director)  We saw this at the New York Film Festival last fall and loved it. Everything Is Copy is a profile of Nora Ephron, the celebrated screenwriter, film director, playwright, novelist, and essayist who died in 2012 at age 71. Her film work includes Silkwood (1983), When Harry Met Sally… (1989), Sleepless in Seattle (1993), and You’ve Got Mail (1998) As directed by her son, Jacob Bernstein, Everything Is Copy is very personal. I like documentaries where the filmmaker has a strong connection to the subject. When Bernstein is interviewing his mother’s sisters or friends, they often preface answers to his questions with “Your mother…” Bernstein is sometimes an on-screen interviewer, sitting on a couch with an aunt, or with his father, Carl Bernstein. This lends a feeling of intimacy, and draws us further in. Everything Is Copy will air on HBO this March. It’s well worth seeing. 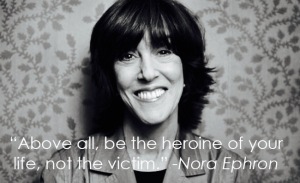 From This Day Forward (Sharon Shattuck, director)  We saw this film at the Full Frame Documentary Film Festival in Durham, NC last April. From This Day Forward couldn’t be more personal for filmmaker Sharon Shattuck. When she was around eight, Sharon’s father, Michael, revealed that he’d been dressing in women’s clothing for some time, and wanted to be called Trisha. This was a huge adjustment for Sharon and her sister, as well as their mother Marcia. Marcia considered divorce, but ultimately realized she loved the person rather than the gender. If this situation sounds familiar, it might be because of the Emmy Award-winning Amazon series, Transparent, which has a similar premise. From This Day Forward is such a positive expression of love, tolerance, and acceptance that I couldn’t understand why it hadn’t been snapped up immediately for either theatrical distribution or airing on a cable channel. It couldn’t be more topical. So I was very happy to learn earlier this week that the film will be distributed this year by Argot Pictures. From This Day Forward has my highest recommendation. Don’t miss it when it comes around.

Trisha happens to be an accomplished artist. Check out the paintings on her website.

Giovanni and the Water Ballet (Astrid Bussink, director)  We also saw this 18-minute short from the Netherlands at Full Frame last year. You may never have a chance to see Giovanni and the Water Ballet, but it’s so wonderful that I had to include it here. Giovanni is ten years old, and wants to be the first boy to compete in the Dutch synchronized swimming championship. But first he has to train long and hard in order to qualify. Giovanni’s dream is also a challenge to gender restrictions, which makes it rather timely.

Hitchcock/Truffaut (Kent Jones, director/co-writer)  An absolute must-see for film buffs and Hitchcock aficionados in particular, Hitchcock/Truffaut is a lethal overdose of clips, information, and illuminating insights from directors such as Martin Scorsese, David Fincher, and Wes Anderson. The film provides fascinating background on François Truffaut’s lengthy interview sessions with Alfred Hitchcock, which were published in 1967. Kent Jones, current director of the New York Film Festival, even had access to audio tapes of the interviews, which are interspersed throughout. Hitchcock/Truffaut makes the case that Truffaut’s book was responsible for a reevaluation of Hitchcock’s importance as a filmmaker. The copy I’d bought when it first came out disappeared somewhere along the way, but Hitchcock/Truffaut inspired me to get another. It also makes me want to see all of Hitchcock’s films again. Not that I need to be persuaded.

Here are two discussions of Hitchcock/Truffaut: the first between Noah Baumbach and Kent Jones; the second Martin Scorsese and Jones. 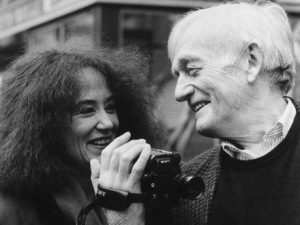 How to Smell a Rose: A Visit with Ricky Leacock in Normandy (Les Blank & Gina Leibrecht, directors) Richard Leacock was one of the founders of Direct Cinema and cinéma vérité, along with Robert Drew, D.A. Pennebaker, and the Maysles brothers. His importance to documentary filmmaking cannot be overstated. Leacock spent his last years living in France, which is where Les Blank shot this film. I could have listened to Ricky Leacock talk for hours about life and filmmaking. How to Smell a Rose is a rare pleasure. (This film is available for streaming on Netflix.)

In Jackson Heights (Frederick Wiseman, director)  Fred Wiseman is another documentary filmmaker whose importance can’t be overstated. Over the course of his long career, he’s amassed a staggering body of work. In Jackson Heights, released last year when Wiseman was 85, is as strong as anything he’s done. It struck me the other day that Wiseman is similar to Studs Terkel, in terms of documenting individuals and institutions. Wiseman, without apparent judgement, shows us how things work.

Iris (Albert Maysles, director)  This study of Iris Apfel was the penultimate film from Albert Maysles, who died last year at age 88. Apfel, a larger-than-life fashionista with an irrepressible personality, reminds me somewhat of Little Edie Beale in Maysles Grey Gardens (1976) — though Iris is a high-functioning, much healthier version. She’s a trip. (Iris is available for streaming on Netflix.)

The following clip is from a press conference with Iris Apfel and Al Maysles at the 2014 New York Film Festival.

Lambert & Stamp (James D. Cooper, director)  Kit Lambert and Chris Stamp wanted to make films, and they hit on the idea of finding a rock band to manage and then make a film about. The band turned out to be the Who, and despite knowing basically nothing about what was required or how to do it, Lambert and Stamp helped them become one of the most popular rock bands in the world. Kit Lambert has passed on, but Chris Stamp is very much alive. Interviews with Stamp, Pete Townsend, Roger Daltrey, and others (including Chris’ brother, actor Terence Stamp), take us through the story in extremely entertaining fashion. Anyone interested in the Who has gotta see this.

Listen to Me Marlon (Steven Riley, director/co-writer) See my previous post on this film. (This film is available via Showtime On Demand.)

A Poem Is a Naked Person (Les Blank, director) See my previous post on this film. (This film is available for streaming on Amazon.)

Seymour: An Introduction (Ethan Hawke, director)  Actor Ethan Hawke first met pianist Seymour Bernstein when he was seated next to him at a dinner party. They struck up a relationship that resulted in this wonderful film. After receiving numerous musical awards and grants, Bernstein gave his final public 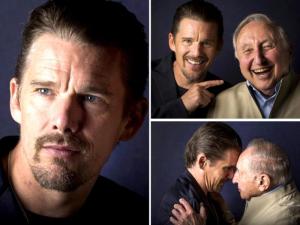 performance in 1977 at age 50. He is now 88. For nearly 40 years he has been composing, writing, and, most importantly, teaching. He’s a great teacher. In the film, one of his students says Seymour showed him what a musician could be. The music throughout is rapturously beautiful, and even more powerful after hearing Seymour explain why he makes the choices he does as we see him practicing and teaching. The film itself is like a master class in music. Seymour talks about music in a way that’s clear, lucid, and compassionate — qualities he brings to his playing, teaching, thinking, and living. He believes that music is a language of feeling — a universal language. Bernstein has lived in the same studio apartment for 57 years. “I thrive on solitude,” he says, adding that he has to be by himself to sort out all the thoughts that course through his mind in order to escape the hurlyburly of the real world. And yet, at the end of the film, Bernstein agrees to perform publicly for members of Ethan Hawke’s acting class. Seymour: An Introduction offers us the privilege of spending time with this extraordinary person. (This film is available for streaming on Netflix.)

What Happened, Miss Simone? (Liz Garbus, director)  I knew Nina Simone was a singer, but that’s about it. Seeing this film was a revelation. She had an incredible voice and a strong commitment to civil rights in her life and music. In her determination to be true to herself, Simone didn’t always play nice. This is a powerful portrait of a conflicted artist. (This film is available for streaming from Netflix.)

The Winding Stream (Beth Harrington, director)  Per Wikipedia, the Carter Family, the subject of this film, “…was a traditional American folk music group that recorded between 1927 and 1956. Their music had a profound impact on bluegrass, country, Southern Gospel, pop and rock musicians as well as on the U.S. folk revival of the 1960s. They were the first vocal group to become country music stars.” I didn’t know much about their actual history, but this film clearly lays it out, as well as tracking June Carter Cash and her husband, Johnny. There’s a fascinating sidebar segment on the importance of Border Radio stations. But most importantly, there’s the Carter Family’s awesome music, which is ingrained in the history of this country. I especially liked a scene of George Jones in the studio singing “Worried Man Blues.” The Winding Stream employs some cut-out animation that I wasn’t too thrilled with, but this is a minor caveat.

6 Responses to What I Saw Last Year: Best Documentaries 2015