I knew I wanted to be a writer when I started at the University of Iowa in 1962, but at the time I thought that meant journalism. I quickly found out that wasn’t the kind of writing that interested me, and by 1963 I was taking fiction writing courses in the Undergraduate Writers Workshop. Some of the people I met in these workshops were also taking classes in the Film Department. This clicked for me. I was already a full-blown movie buff, so it seemed perfect that I could be writing stories and making movies at the same time.

In the Fall semester of 1964 I took a course called Cinematography Techniques, taught by Dr. John Kuiper, who a year later became the Head of the Motion Picture Section of The Library of Congress. TAs in that class were Ted Perry — later the Director of the Film Department at the Museum of Modern Art in NYC and Chairman of Cinema Studies at NYU, and now in the Film and Media Culture Department at Middlebury College in Vermont — and Bob Rose, a crazy guy with a big beard, sort of a beatnik, and kind of brilliant. I’m still in touch with Ted, but unfortunately have lost track of Bob. This was a very exciting time. I was just off the farm, turned loose in a college town seemingly filled with crazy hipsters as the 60s got rolling. I was over-stimulated by all this stuff and all these people. Anything and everything seemed possible. Ah, youth!

At that time, production courses and film studies classes were held in the Old Armory Televison-Film Laboratory, seen below in a map of part of the campus at that time. 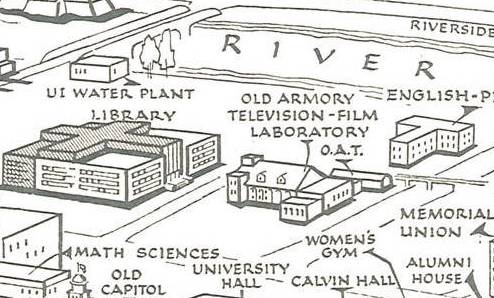 In the second semester of that school year, I took Cinema Production, which is when I made my first short film, Bridgework. We’d done short exercises every week as part of the Cine Tech class, but this was the first time it was my film, not an exercise, and something I was totally responsible for from start to finish. I discovered that editing was what I enjoyed most about the filmmaking process. Which I guess makes sense. I’m a writer, and film editing is a kind of writing, splicing shots together instead of words.

This was no-frills filmmaking. We didn’t have

sync sound capabilities and were using spring-wound Bell & Howell 70DR cameras that held 100 feet of 16mm black & white film and were basically indestructible. They’d been used by combat photographers during World War II. I shot most of Bridgework riding on the back of a motorcycle. So if I’d fallen off or we’d crashed, the camera would have been okay. Good to know.

In the fall of 1965 I made my second film, The Killing Ground. This one was more ambitious than my first, but as usually happens, it turned out somewhat different than I’d imagined. I’ve kept prints of both films all these years, and recently had them transferred to Blu-ray disc and flash drive. When I watched them a few days ago, for the first time in many years, they were almost exactly as I’d remembered them — except that The Killing Ground has some shots that are way too dark. Do over!

Remember that these films were made nearly 50 years ago when I was 20 years old. But no more excuses; here they are in all their glory. — Ted Hicks