“Rosebud was his sled!” – Random Notes on Orson Welles

The first time I saw Citizen Kane — an experience I’ll never forget — was in a film class at the University of Iowa in 1964 or ’65. The class was held in a long, narrow room with rows of fixed, wooden seats and a small projection booth in the back. Not a likely setting for a powerful revelation. I’d heard of Orson Welles and Citizen Kane , but wasn’t prepared for the thrilling jolt I was about to get at the end of the film’s noirishly ominous opening sequence — almost like the beginning of a horror film — with the abrupt cut to the blaring “News on the March!” footage. This was something else again. From that point on, Kane completely blew up my notions of what movies could be. 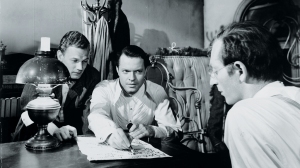 We had a single 16mm projector for the classroom. Citizen Kane runs 2 hours, and as I recall, the print was mounted on at least three reels. When a reel ran out, there was about a 5 minute break while the next reel was threaded up on the projector. I remember feeling quite anxious during the reel changes, for fear Kane wouldn’t continue to be as great as it had been up to that point. No problem there. I very much wanted to see it again, but it was only being shown once for this class. I’m not sure how I managed this, but I borrowed the print from one of the class TAs, who I think had the responsibility of shipping it back to the distributor. He must have also given me a key to the classroom, because I went there at night to watch Kane by myself from the projection booth. It was just as great the second time. Bernard Herrmann wrote a powerful music score that lends amazing emotional resonance to the film, especially during the ending, which gets me every time I see it..

My favorite Welles films, after Kane, are The Magnificent Ambersons (1942) and Touch of Evil (1958). Ambersons was famously taken away from Welles when he was out of the country. It was re-edited, additional scenes were shot, and an ending was added that was definitely not what he intended. Even so, it’s a beautiful film. Sure, I’d love to see it in the form Welles had planned, but it’s pretty great as it is. Touch of Evil, a flamboyant display of B-movie pulp raised to a much higher level, is a tour de force from beginning to end, especially in the astonishing opening — a single-take tracking shot lasting 3 minutes, 20 seconds. I saw it again last week at Film Forum, and it still burns up the screen.

Directing “Too Much Johnson”

Orson Welles is never far from my mind, especially of late. He keeps turning up. In 1938, three years before Citizen Kane, Welles directed a silent film called Too Much Johnson. It had been intended to be part of a Mercury Theatre stage production of the 1894 comedy by William Gillette. This didn’t happen, and the film was never publicly screened. Too Much Johnson was thought lost until a print was discovered in a warehouse in Pordenone, Italy, in 2008. It was shown at the Pordenone Silent Film Festival in October 2013, and had its New York premiere at the DGA Theatre the following month. Richard Brody wrote a lively piece about the film in the 11/26/13 issue of The New Yorker , which is definitely worth reading.

And then last month there was news that the last film Welles had been working on for years, The Other Side of the Wind, would be completed and released next year, in time for what would have been Welles’ 100th birthday on May 6th. After Ernest Hemingway’s suicide in 1961, Welles had the idea to make a film about an aging bullfight enthusiast. By 1966 he had changed the character to that of a film director — played by an aptly-cast John Huston in scenes shot between 1970 and 1976. Per an article in the The New York Times on 11/10/14, Welles had “worked obsessively on the film” during the last 15 years of his life. After his death in 1985, he left behind a 45-minute edited work print and hundreds of cans of negatives. The film had already been tied up for years in legal struggles with investors. It appears that now the various rights holders are in agreement and have cleared the way for the film to be finished by producer Frank Marshall and director Peter Bogdanovich (who plays a character in the film), using notes from Welles. We can only hope.

And more Welles! Last month I attended a screening of a documentary called Magician: The Astonishing Life and Work of Orson Welles, directed by Chuck Workman, well-known for creating short films and openings for twenty Academy Awards telecasts over the years. His film Precious Images (1986), an 8-minute compilation of 470 shots from films covering the range of American film history, won an Oscar for Best Live Action Short. Magician didn’t quite meet my expectations, but it came close. It’s very good, and well worth seeing. What I found most compelling was the material on Welles’ early life, and the rich variety of clips from interviews conducted over the years. Chuck Workman’s strength as a filmmaker is evident in the way he has edited this wealth of material together. It’s a good film for those who know little about Welles, as well as those who know a lot.

Orson Welles is a nearly unique figure in American life, a brilliant, tragic, magical presence. In 1938, at age 23, he freaked out a good part of the country with his War of the Worlds broadcast. I’ve listened to it several times, and I can see why. Three years later he delivered Citizen Kane, arguably one of the greatest films ever made. How could anyone follow that, even Welles? His subsequent efforts to get films made despite lack of funds or studio support are well documented. It’s seems appropriate that Welles never finished his film of Don Quixote, since he seemed to spend much of his life after Kane tilting at windmills. There have been hundreds of books and articles written about Welles, and I’m sure there’s no end in sight. Welles is a cinematic touchstone, an endless source of fascination.

Part of my preparation for writing this post was searching for photos and film clips to include. What struck me when I saw the many pictures of Welles was how much his appearance and presence changed over the years. Off the top of my head, it’s hard to think of anyone else where this evolution has been quite so dramatic. The image that most readily comes to mind for a lot of people now, I’m sure, is that of the grossly overweight Welles in his later years, seen frequently on talk shows or in ads selling Paul Masson wine. The man who made Citizen Kane! Seeing him younger can be quite a jolt. In photos taken when he was 15 or so, he has a strange beauty that can seem almost extraterrestrial. 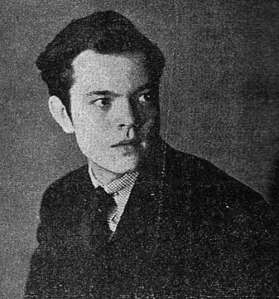 As I wrote earlier, Orson Welles is never far from my mind. He keeps turning up. He’ll always be here. — Ted Hicks

There’s more! Bruce Goldstein at Film Forum, here in New York, has programmed a 5-week Orson Welles retrospective celebrating his centennial year. This series kicks off on January 1 with an 8-day run of Citizen Kane, followed by all of his features and many films he acted in.

Iowa farm boy; have lived in NYC for 40 years; worked in motion picture labs, film/video distribution, subtitling, media-awards program; obsessive film-goer all my life.
View all posts by Ted Hicks →
This entry was posted in Books, Film, Home Video, TV and tagged Bernard Hermann, Charleton Heston, Citizen Kane, Gregg Toland, Orson Welles, The Other Side of the Wind, The War of the Worlds radio broadcast, Too Much Johnson, Touch of Evil. Bookmark the permalink.

8 Responses to “Rosebud was his sled!” – Random Notes on Orson Welles