Listening to Marlon – Beyond the Screen

Listen to Me Marlon, Stevan Riley’s astonishing new film about Marlon Brando, is unlike any documentary I’ve ever seen. During his lifetime, Brando recorded his thoughts about life and work and the world he lived in on hundreds of audio cassettes. Approximately 300 hours of material were made available to British filmmaker Stevan Riley to use in the production of this film. In an overwhelming display of inspired organization, Listen to Me Marlon weaves an intricate tapestry of thought and feeling expressed through Brando’s words, backed up by films clips, archival footage, home movies, and stills that reflect and reinforce what we hear. The result is a kind of impressionistic, time-traveling, oral autobiography, and it will knock you out. Here’s the trailer:

I’ve attended three screenings so far, and each time I responded on a deeper level . It just gets better and better. I’ve been trying to figure this out, how it works for me, because I think it’s unusual. Listen to Me Marlon opened me up in a very emotional way, and tapped into my love of movies and my love for Brando, especially the ferocity of the younger Brando and the amazing power of his best films. Something so naked and beautiful comes out in this film it could break your heart.

The words we hear throughout the film are almost exclusively Brando’s, except for occasional clips of television newscasts and Marlon being interviewed by Dick Cavett and others. In a soothing, nearly hypnotic voice, we hear his thoughts on many topics, including his involvement in the Civil Rights Movement, Native American rights, and, of course, acting. He’s incredibly articulate, often poetic, but also clear and direct. I was especially struck when he spoke of the struggle to preserve sanity and the sense of reality that is taken away by success. He speaks of his childhood in Nebraska with an abusive father and alcoholic mother, who he refers to as “the town drunk,” and how he “used to love the smell of liquor on her breath.” Brando loved his mother, but it’s profoundly sad when he begins a thought with “When what you are as a child is unwanted…” Bernardo Bertolucci pushed Brando to use these memories to help fuel his raw performance in Last Tango in Paris (1972).

Much of Listen to Me Marlon is about his films and the art and craft of acting. He talks about how important it was for him to study under Stella Adler, a proponent of the Stanislavski “Method.” He says that when there are close-ups in film, your face becomes the stage. Brando’s first feature film was The Men (1950), in which he plays a soldier who becomes paraplegic due to a combat wound. We see footage of Brando with actual disabled soldiers, learning about their behavior and how they live. Even at this early stage of his film career, he went in deep. As he says, “You have to know your subject. You have to know your character.” He also says, “Everything you do, make it as real as you can,” and “Never let the audience know how it’s gonna come out.” I found the following sequence from Listen to Me Marlon to be incredibly moving and powerful.

At the beginning of the film, Brando tells us that he had his head digitized in the 1980s with scans containing every conceivable facial expression. He speculates that this will be the future of filmmaking, with no actual actors necessary. Stevan Riley was able to track down the digital files and use them to create an animated version of the 3D head, which was then synced to Brando’s voice as he delivers Shakespearean soliloquies and other musings. This holographic head becomes a truly ghostly presence drifting through the film, surreal and unsettling. 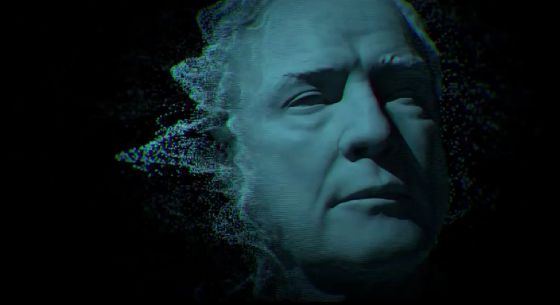 After seeing Listen to Me Marlon for the third time, I needed more Brando, so I went home to watch On the Waterfront (1954) on an excellent Blu-ray disc from The Criterion Collection. I highly recommend this edition, since it looks and sounds superb, and has Criterion’s usual wide array of supplemental features. Here is a clip from that film, with Brando at full speed:

Listen to Me Marlon is being released by Showtime Documentary Films on July 29 at Film Forum here in New York, and on July 31 at the Landmark in Los Angeles, followed by a nationwide release through the summer and fall. It will air at a later date on Showtime’s cable channel, so there will be plenty of opportunities to see it. This is a unique piece of work, put together with uncommon skill and taste by the filmmakers. It’s a privileged look into the heart and mind of one of the greatest actors who ever lived, and a fine addition to his legacy.

Listen to Me Marlon was shown at the Film Society of New York’s annual New Directors/New Films series earlier this year. There was a Q&A with director Stevan Riley following the screening on March 27 at the Walter Reade Theater. I was at that screening and asked the first question, which concerned the digital head. Because there were no microphones in the audience, you don’t hear the questions, but moderator Marion Masone repeats them, and there’s not much dead air. Stevan Riley’s responses are very informative and really add a lot. Here is the Q&A.

Finally, when I was searching online for photographs I might use for this post, I was struck by this one of Brando before and after makeup was applied for his role in The Godfather (1972). It’s a jolt to realize he was only 48 when he played the aging Don Corleone. Of course, his performance was much more than makeup. Brando was uniquely gifted, both as an actor and as a man. Listen to Me Marlon makes that abundantly clear. — Ted Hicks 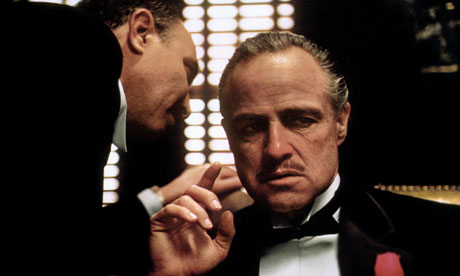 7 Responses to Listening to Marlon – Beyond the Screen