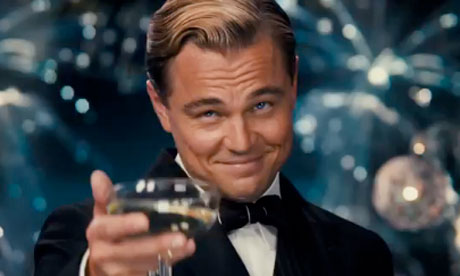 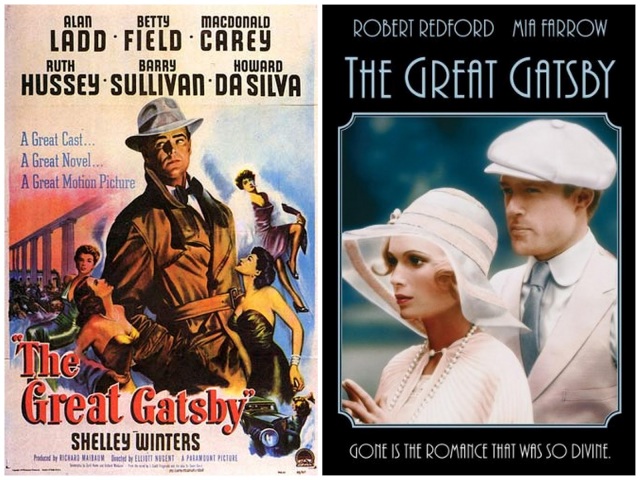 Which one of these Gatsbys would you rather see? Based on the poster for the Alan Ladd version (1949), which appears to recast the F. Scott Fitzgerald novel in noirish gangster terms, it’s no contest, that’s the one for me. But I haven’t seen it, so I could be wrong. It might be as much of a misfire as the Robert Redford (1974) and Leonardo DiCaprio (2013) versions. Though I’ll bet it doesn’t try to pass itself off as a classic, and therefore might be more entertaining (though Leonard Maltin’s movie guide calls the film “Too talky and much too literal minded,” so I’m obviously guessing as to its possible merits).

The 1949 Great Gatsby was directed by Elliott Nugent, who directed Bob Hope in three features, and co-written by Richard Maibaum, who would go on to write thirteen James Bond films. In this version, Alan Ladd as Gatsby has acquired his fortune as a bootlegger. To be fair, his bootlegging past is mentioned several times in the novel (as well as the rumor that he had “killed a man”), though a trailer fragment I found shows Gatsby in a shootout, blasting away at gunmen in another car as they pursue him through city streets at night, so I’m thinking they play up this aspect. This may not be the tone Fitzgerald was after, but as I learned from reading a synopsis at the Turner Classics Movies website, the film does follow the basic plot of the novel, as do the 1974 and 2013 versions.

Other than the fact that the 1949 film turns him into more of a tough guy than Fitzgerald probably intended, I have the feeling that Alan Ladd could make a fairly credible Gatsby. His slight stature (5′ 6″ is the most commonly reported height) and vulnerable smile seem appropriate to the character, at least as far as looks go. Again, I haven’t seen this version, which is currently unavailable on home video (I’m hoping it will turn up on TCM), but I think the following brief clip gives a sense of what this Gatsby might be like.

It’s also interesting to see the ways the studio marketed this film, taking the beefcake route in this particular presentation of Alan Ladd, as seen in the poster at left and the movie tie-in paperback cover at right. Again, I’m assuming this is probably not what Fitzgerald had in mind, though it does put an intriguing spin on things. 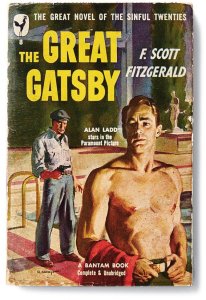 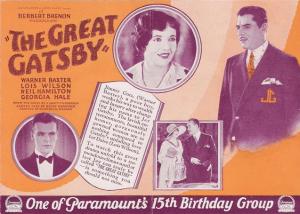 The first film version of The Great Gatsby was made in 1926, just one year after the novel was published. The book received mixed reviews and sold only 20,000 copies in its first year (when Fitzgerald died in 1940, he was certain he’d been a failure). Despite this, a successful stage adaptation opened on Broadway within a year, followed by this silent version, starring Warner Baxter as Gatsby and Neil Hamilton (better known now as Commissioner Gordon on TV’s Batman series in the 60s) as Nick Carraway. It is by all accounts a lost film, though I did find the following trailer. Note the hyperbole of the on-screen description that refers to Gatsby as a “record-selling novel.”

I also ran across an interesting review of the 1926 Gatsby (I don’t know where it appeared or who wrote it — other than the initials “E. G.”) What strikes me about the review is that it could just as well be talking about the new Baz Luhrman version, which has received many of the same criticisms (and quite a few more). 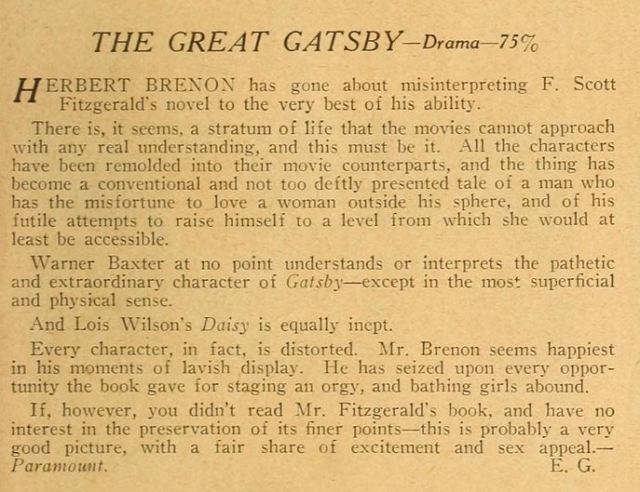 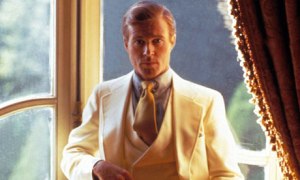 I had reasonably high expectations for the 1974 Gatsby, which I haven’t seen since its initial release, but remember finding it flat and turgid. This was disappointing, since the cast and filmmakers felt right. Robert Redford, 36 at the time, seemed an excellent choice, maybe an obvious one, to play Jay Gatsby. He was extremely popular, and his golden looks were thoroughly American. He was a good fit for the part. And as I recall,  he said “old sport” as well as anyone is likely to get away with. I also liked Jack Clayton’s work, a British director with strong credentials. His previous films included Room at the Top (1959) with Lawrence Harvey and Simone Signoret; The Innocents (1961) with Deborah Kerr, based on Henry James’ The Turn of the Screw; and The Pumpkin Eater (1964), an extraordinary film with Anne Bancroft, Peter Finch, and James Mason. In retrospect, Clayton wasn’t the right director for The Great Gatsby. I’m not sure who would have been better, though it’s interesting to imagine what might have been had Francis Ford Coppola directed. Coppola wrote the Gatsby screenplay, taking over when the original screenwriter, Truman Capote, was fired. In Capote’s version (per IMDB), Nick Carraway was a homosexual and Jordan Baker a “vindictive lesbian.” This might have brought some needed life to the picture, but we’ll never know.

Baz Luhrman’s three-ring (3D) circus version of The Great Gatsby came out earlier this year, preceded by much advance hoopla. For me, nearly everything about the film is too much, over the top, inflated, and numbing. This approach worked well for Luhrman with Moulin Rouge (2001), which I loved, but for Gatsby, not so much. The only justification I can see for shooting Gatsby in 3D, other than higher ticket prices, is to render the excessiveness of Gatsby’s lifestyle even more so. The only scene that seemed real to me was set in the Plaza Hotel in New York, with Gatsby, Nick Carraway, Jordan Baker, Daisy and her husband Tom knocking back drinks in the stultifying heat while the tension rises. This is where truth gets told and the knives come out. It has a snap and electricity that I felt nowhere else in the film, and suggests what the film could have been.

For all the glitz and glitter on display, nothing is more excessive than Leonardo DiCaprio’s endless use of the term “old sport” to punctuate nearly every sentence. I realize “old sport” comes from the novel, where it’s used ninety-four times, but DiCaprio says it so frequently here that it just becomes a joke, an awkward affectation. What works on the page doesn’t necessarily work when you hear it spoken.

I’ve always liked DiCaprio as an actor, though I didn’t buy him as J. Edgar 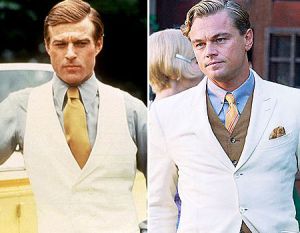 Hoover in Clint Eastwood’s J. Edgar (2011), a film that seemed more about prosthetics and makeup than anything else. But he’s been basically incredible in films such as What’s Eating Gilbert Grape (1993), Marvin’s Room (1996), The Departed (2006), and Django Unchained (2012). And he certainly looks right for Gatsby (though maybe not as right as Redford). He was a good choice in 2013, as Redford was in 1974, but he may have been undone by Luhrman’s style of filmmaking (and having to say “old sport” so many times).

There’s much that’s wrong with this Gatsby; the weird framing device of Nick writing the novel in some sort of sanitarium back in the Midwest, for example. Though oddly enough, the anachronistic music choices didn’t bother me at all. In fact, I think Luhrman should have gone all the way and made the film a musical. That might sound like a joke, but the more I think about it, the better it sounds. I’m serious. Or imagine Gatsby directed with this cast by Martin Scorsese. Think about that. He’d be perfect for this. But whatever Luhrman’s Gatsby is or isn’t, it’s never as unwatchable and annoying as a lot of other movies, such as Eat Pray Love (2010), or a film I saw earlier today, the totally meaningless Now You See Me. Baz Luhrman is a director with skill, energy, and imagination, and when his films work, they’re something to see.

There have been six film versions of Gatsby since 1926, including a TV movie in 2000, with Mira Sorvino as Daisy and Paul Rudd as Nick Carraway, which caused barely a ripple from what I can find. G appeared in 2002, with Richard T. Jones, Blair Underwood, and Andre Royo in a more radical interpretation about a hip-hop mogul who moves to the Hamptons in search of his lost love. It, too, was not a success. Maybe films of The Great Gatsby are destined to be made every twenty years or so until someone finally gets it right. Or maybe some books should just be left alone. – Ted Hicks 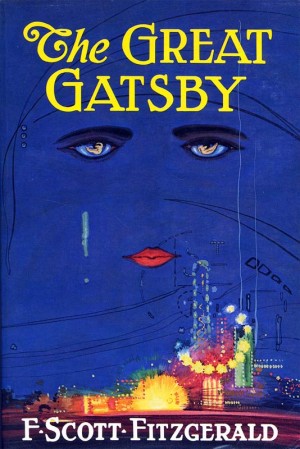