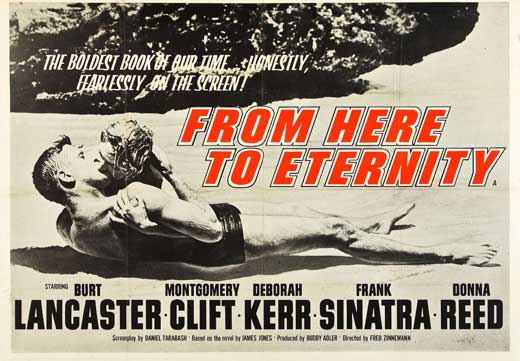 Burt Lancaster would have been 100 years old on November 2 of this year. The Film Society of Lincoln Center is taking the occasion to show 13 of his 74 feature films. Last Friday I saw one of my favorites, From Here to Eternity (1953). I’ve seen it many times over the years, but can’t remember the last time I saw it on a big theater screen. The film is just as powerful as it ever was, which is saying something. For me, it’s just about perfect from top to bottom, start to finish. Adapted by Daniel Taradash from James Jones’ best-selling novel, From Here to Eternity was nominated for 13 Academy Awards and received eight, including Best Picture, Best Director (Fred Zinnemann), Adapted Screenplay, Supporting Actor (Frank Sinatra), and Supporting Actress (Donna Reed), Best Cinematography, Editing, and Sound Recording. Both Lancaster and Montgomery Clift were nominated for Best Actor, but lost to William Holden in Stalag 17.

The role of First Sergeant Milt Warden was a definitive one for Lancaster. As an actor, Lancaster projected great strength, authority, virility, and intelligence. This role used all of that and then some. Throughout his career he always seemed like the toughest guy in the room, the most capable, and the most dangerous. I’m always struck by his precise diction, the way he bites off his words without any waste, and the way he can use “ain’t” repeatedly in From Here to Eternity and still sound sharply intelligent.

From Here to Eternity is filled with great film acting, down to the smallest parts. As Private Robert E. Lee Prewitt, a haunted outsider who loves the army but is determined to go his own way, Montgomery Clift also had a definitive role. Prewitt is the moral center of the film; it’s impossible not to empathize with him. Frank Sinatra is equally amazing as Private Angelo Maggio, Prewitt’s friend and a “tough monkey” destined for the stockade and the sadism of Sergeant “Fatso” Judson (Ernest Borgnine). Sinatra had campaigned heavily for the role, which resuscitated a flagging career. All three figure strongly in my single favorite scene in the movie, where Lancaster breaks up a fight between Maggio and “Fatso” Judson in a bar, and says the great line, “Okay, Fatso, if it’s killin’ you want!” It’s a terrific scene that foreshadows much to come for Clift and Sinatra’s characters.

Earlier in the bar scene, before the fight starts, there’s another key moment when Prewitt displays his considerable talent with a bugle, playing with a clarity and passion that  deepens our understanding of and feeling for his character. It’s quite thrilling.

Though without a doubt, the most famous scene in From Here to Eternity has to be Lancaster and Deborah Kerr on the beach. It’s the one that almost everybody knows, even if they haven’t seen the movie. It has a life outside the film. The image, seen in the poster above, is iconic. The scene itself has been referenced, imitated, and parodied in countless films, TV shows, and publications, including Mad magazine (of course).

It’s ironic, considering what the characters go through, that From Here to Eternity is set in Hawaii, an exotic location often seen as a kind of paradise. Lancaster’s Milt Warden, involved in an illicit and illegal affair with the company commander’s unhappy wife, Karen Holmes (Deborah Kerr), is unwilling to take the step of becoming an officer – he hates officers – that would allow them to be together. Clift’s Robert E. Lee Prewitt falls in love with Lorene (Donna Reed), a hostess at a “gentleman’s club” (a brothel in the novel). She loves him, but doesn’t want to marry a career soldier. The Japanese attack on Pearl Harbor sets in motion the resolutions to these storylines. No one walks away happy, and some don’t walk away at all, but it all feels right. It’s a wonderful movie, probably a great one.

Lancaster occasionally played weak characters, such as his roles in Come Back, Little Sheba (1952) and The Rose Tattoo (1955), but those were exceptions. His film debut was the lead in The Killers (1946), adapted from the Ernest Hemingway short story and directed by the underrated Robert Siodmak. It’s interesting, and I think unusual, that Lancaster was the star of the films he was in right from the start. He followed The Killers with a series of

exceptional film noirs. These included Jules Dassin’s grim and violent prison drama Brute Force (1947); I Walk Alone (1948), Lancaster’s first pairing with the equally intense Kirk Douglas; Sorry, Wrong Number (1948), with Barbara Stanwyck; the evocatively titled Kiss the Blood Off My Hands (1948); and his second film with Robert Siodmak, Criss Cross (1949), which includes Tony Curtis, in an unbilled bit part, who would later co-star with Lancaster in Trapeze (1956) and the incredible Sweet Smell of Success (1957).

Per the typical film noir template, the characters Lancaster played in these films, while tough and capable, were often victims of forces beyond their control and larger than themselves. Lancaster went on to star in  The Flame and the Arrow (1950) and The Crimson Pirate (1952), swashbuckling adventure films that utilized his training as a gymnast and acrobat. These films featured Nick Cravat, who Lancaster knew from the

1930s when they were an acrobatic duo performing in a circus. Lancaster’s ability to do his own stunts added credibility and authenticity to his films, quite literally in a film like Trapeze. To my knowledge, there was never anything physically clumsy or awkward about the characters he played. Even in roles that didn’t require stunt work, his physicality informed the way he moved, the way he walked across a room, or even just sitting still.

Lancaster made four films directed by Robert Aldrich including  Apache and Vera Cruz in 1954, and Twilight’s Last Gleaming (1977). My favorite Aldrich film with Lancaster is the extremely stark and brutal Ulzana’s Raid (1972). I saw Apache and Vera Cruz earlier in the week. They don’t hold up all that well, whereas Ulzana’s Raid, which I saw yesterday, is every bit as good as it ever was. Set in 1880s Arizona, Lancaster plays a scout for the U.S. Army who accompanies a troop of soldiers to track down and capture the Apache warrior Ulzana, who has left the reservation to raid homesteads in the area, torturing and killing everyone they meet. It’s an exceptionally tough-minded film, and you see things you haven’t seen in a Western before.

As much as I love Lancaster in his earlier films, such as Brute Force, Criss Cross, and especially From Here to Eternity, his later films often have greater weight. As he gets older, his energy and strength become, for the most part, more self-contained, but it’s still there. He becomes more of an authority and less of an acrobat. In films such as the corrosive Sweet Smell of Success, Lancaster is a truly menacing figure in his horn-rimmed glasses as

a powerful newspaper columnist (based on Walter Winchell) who cuts people to ribbons with his words. In John Frankenheimer’s great political thriller Seven Days in May (1964), he plays an equally threatening figure, an Air Force general engineering a coup d’état against the government (this was also the fifth of seven films he would appear in with Kirk Douglas).

Lancaster made five films directed by John Frankenheimer, including Birdman of Alcatraz (1962), but my favorite has to be The Train (1964). Frankenheimer took over direction of the film from Arthur Penn after Lancaster had Penn fired. He had that kind of clout. Lancaster plays a French railway yard official during World War II who reluctantly agrees to help stop a Nazi plan (led by an excellent Paul Scofield) to transport French art treasures to Germany by train. Shot in black & white, using little or no special effects (the train smash-ups are the real thing, and you can feel it), the physical production feels tremendously authentic. Once again, Lancaster does his own stunts.

Another favorite Lancaster film of mine is The Professionals (1966), written and directed by Richard Brooks, who had previously directed Lancaster’s Oscar-winning performance in Elmer Gantry (1960). This is a tremendously enjoyable Western set in 1917 with Lancaster and Lee Marvin leading Robert Ryan and Woody Strode on a mission to rescue a wealthy cattleman’s wife, Claudia Cardinale, from Jack Palance, a former Mexican revolutionary who has abducted her. The story may be a bit thin, but Lancaster and Marvin are great together, and the early 20th Century period and advanced weaponry (machine guns and automobiles) set it apart from other Westerns. Three years later, Sam Peckinpah would set The Wild Bunch (1969) in a similar context. The score by Maurice Jarre, who also did the music for The Train, is very effective and does a lot to sell the movie.

In 1978 Lancaster starred in Go Tell the Spartans, a grossly underseen film about U.S. military “advisors” in Vietnam set in 1964. It was one of the first films to critically address U.S. involvement in Vietnam. The Green Berets it is not. It was critically well-received in its limited release, but isn’t that well known today.  Lancaster, 65 at the time, obviously believed in the film and its message to the extent that he put up $150,000 of his own money to cover a short-fall in the budget.

In addition to winning for Elmer Gantry, Lancaster received Academy Award nominations for Best Actor in From Here to Eternity, Birdman of Alcatraz (1962), and Louis Malle’s Atlantic City (1980), for which he received numerous other nominations and awards. It’s a wonderful performance, filled with grace, dignity, and bravado.

Finally, a good way to wrap up this piece is with a brief Turner Classics Movies tribute to Burt Lancaster, narrated by his frequent director, John Frankenheimer. The clips are excellent, and it’s great hearing what Frankenheimer has to say, especially about his  working relationship with Lancaster. – Ted Hicks

All of the films cited are available on home video through Netflix, Amazon, and other sources. 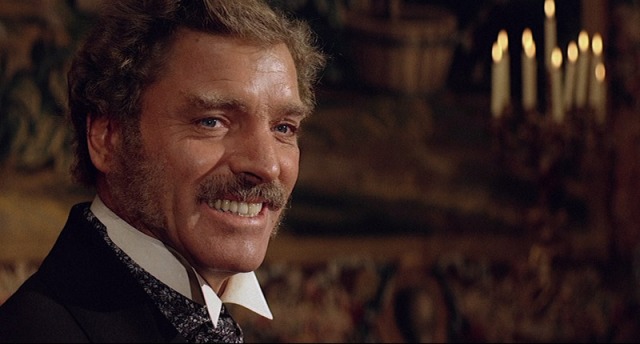 7 Responses to Burt Lancaster – “If it’s killin’ you want…”