The following ten documentaries, listed in alphabetical order, represent the best of what I saw last year.

From Daniel Fienberg’s review in The Hollywood Reporter (6/23/21):

“Presented with no narrative and limited structure, Ascension is a collection of breathtaking images and revelatory vignettes that position China as a simultaneously alien and completely universal cultural and industrial landscape, never spelling out which direction points toward progress. Kingdon’s wholly observational film — no voiceovers, talking heads or title cards steer you — was filmed across 51 locations around China and uses ‘class’ as its structure, such as it is. Ascension is loosely divided into three parts, starting with the workers in Chinese factories, moving into a middle class positioned at the pivot of a burgeoning consumer culture — salespeople, influencers and attendants to the rich — and finally the wealthy with their embrace of Western excess.”

I’ve seen this film twice, and each time found it to be a mind-blowing experience. We’re given nothing to guide us other than what we see and hear. It’s up to us to figure out the context of each setting, which is sometimes obvious and sometimes not. There are a few cases where I’m still not sure of what’s  going on, though this didn’t detract at all from my enjoyment and amusement. A sequence inside a workroom where  young women are assembling and finishing highly detailed, life-size sex dolls is jaw-dropping. I love it that nothing is explained. I was just a stranger in a strange land. 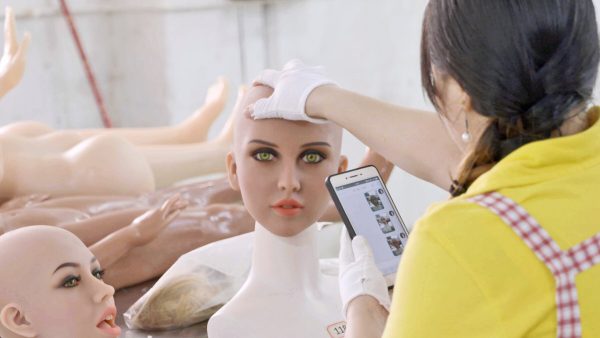 Available for streaming on Paramount +.

Count Me In (Mark Lo)  Rock drummers talk about drumming and play the hell out of their drums. It’s very exciting. Who doesn’t respond to drumming? It’s primal.

Available for streaming on Netflix. 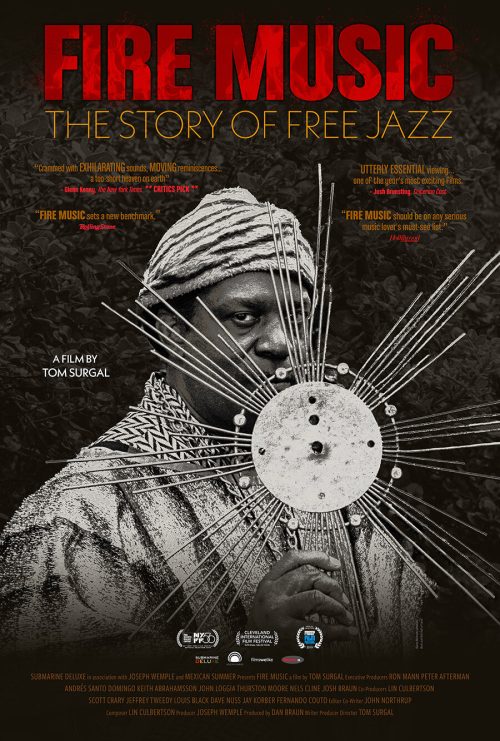 “Although the free jazz movement of the 1960s and ‘70s was much maligned in some jazz circles, its pioneers – brilliant talents like Ornette Coleman, Cecil Taylor, Sun Ra, Albert Ayler, and John Coltrane – are today acknowledged as central to the evolution of jazz as America’s most innovative art form. FIRE MUSIC showcases the architects of a movement whose radical brand of improvisation pushed harmonic and rhythmic boundaries, and produced landmark albums like Coleman’s Free Jazz: A Collective Inspiration and Coltrane’s Ascension. A rich trove of archival footage conjures the 1960s jazz scene along with incisive reflections by critic Gary Giddins and a number of the movement’s key players.

“One of the most alluring features of free jazz is its wide breadth of artistic expression. From the highly emotive, free blowing mode coming out of New York, championed by pioneers like Ornette Coleman and Albert Ayler, to the more composed, New Music influenced strains of Chicago’s AACM, to the space age afro-centric stylings of Sun Ra and his Arkestra (allegedly from the planet Saturn). The common thread always being the heavy emphasis on open improvisation and virtuosic playing.”

Not yet available for streaming.

This extraordinary film “…follows Luis, an undocumented Guatemalan teenager trying to eke out a living in New York City under the radar of the authorities, and Judy, a female ICE officer tasked with scouring Luis’ neighborhood for people like him. Being an immigration agent and a first-generation immigrant herself, Judy talks about the ironies and intricacies of her life while Luis is shown trying to overcome fatigue and anxiety to achieve his American dream.” — TV Guide

Lots of humanity here. We see Luis getting battered by the system and a caring ICE agent who struggles with what her job requires. Five  Years North is a good illustration of how people come to this country for the hope it represents and what they have to deal with in trying to make a go of it.

Not yet available for streaming.

Roadrunner: A Film About Anthony Bourdain (Morgan Neville, director)  All I knew about Anthony Bourdain before seeing this film was that he had something to do with food and cooking. I found out that there was a little more to him than that. Roadrunner shows Bourdain to bea fascinating, complicated character. I was totally engaged and quite moved by the end.

From The Daily Yonder:

“Storm Lake, a 2021 film directed by Jerry Risius and Beth Levison, is, at once, about “a newspaper, a family, and a community”—each of which is inseparable from the rest. The documentary offers an extensive and intimate look into The Storm Lake Times—the Pulitzer Prize-winning local newspaper in the small agricultural and meatpacking community of Storm Lake, Iowa. With a population under 15,000, the town is a testament to rural Iowa’s changing landscape amidst climate change, immigration, and Big Agriculture.

“Founded by John Cullen in 1990 and staffed entirely by other members of the Cullen family, The Storm Lake Times has diligently covered those big shifts, and much more. The documentary follows The Storm Lake Times’ small staff to national (yet deeply local) events like the 2019 primaries, and to the community spaces that form the heart of the local newspaper—an elementary school classroom, the county fair, the town’s Fourth of July parade, among others.”

I grew up on a farm about 12 miles southeast of Storm Lake, located in what I like to call the southeast corner of northwest Iowa, so I have a very personal connection to this film. Storm Lake is where my movie life began, with regular visits to the Vista Theater (seen above). I left years before Art Cullen and his brother started The Storm Lake Times, but I’m proud of the work they’ve done and recognition they’ve received as a progressive voice in a red state. This documentary is a clear reflection of that.

Street Gang: How We Got to Sesame Street (Marilyn Agrelo, director)

Here’s an edited version of what I wrote in a previous post:

Street Gang is WONDERFUL!!! Sesame Street is an institution, and an important one. From an educational, cultural, and entertainment point of view, it’s close to unique. Directed by Marilyn Agrelo, Street Gang skillfully weaves together archival  footage from the program and behind the scenes with interviews to tell the extraordinary story of the beginnings and development of the show. It’s inspiring and entertaining in its message.

Available for streaming on HBO Max.

Summer of Soul (Questlove aka Ahmir Khalib Thompson, director)  Everybody knows about the Woodstock music festival in 1969, but few remember — if they ever knew in the first place — another music gathering that took place in Harlem, attended by 300,000 people over six weekends. This film is an attempt to set the record straight. Filled with great music by great musicians, it’s an incredible rush of positive energy. It’s been a while since I’ve seen it, but as I recall, Stevie Wonder blew the doors off.

“…part music film, part historical record created around an epic event that celebrated Black history, culture, and fashion. Over the course of six weeks in the summer of 1969, just 100 miles south of Woodstock, The Harlem Cultural Festival was filmed in Mount Morris Park (now Marcus Garvey Park). The footage was never seen and largely forgotten–until now. SUMMER OF SOUL shines a light on the importance of history to our spiritual well-being and stands as a testament to the healing power of music during times of unrest, both past and present. The feature includes never-before-seen concert performances by Stevie Wonder, Nina Simone, Sly and the Family Stone, Gladys Knight and the Pips, Mahalia Jackson, B.B. King, The 5th Dimension, and more.” 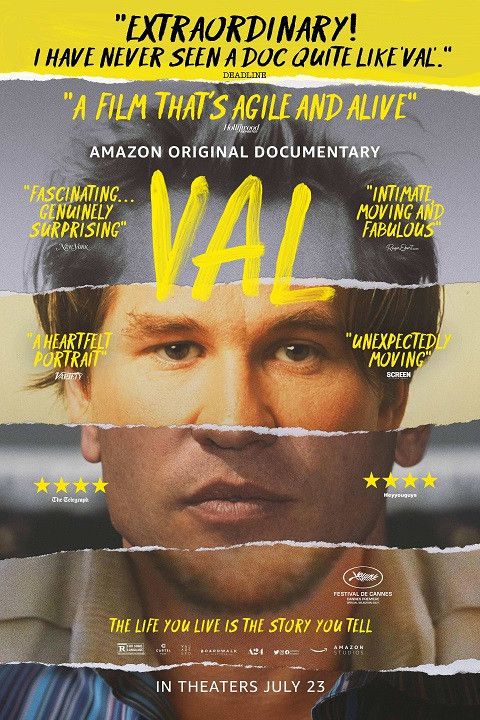 “Val Kilmer, one of Hollywood’s most mercurial actors, has been documenting his life and craft through film. He has amassed thousands of hours of footage, from home movies made with his brothers, to time spent in iconic roles for blockbuster films like Top Gun and Batman. This raw and wildly original documentary reveals a life lived to extremes and a heart-filled look at what it means to be an artist.” – per IMDB.

This film  feels rather unique in content and structure. Kilmer’s willingness to let it all hang out is startling in its effect. We see him in his movie-star prime and then after throat cancer has diminished him physically, but certainly not in spirit. Throughout, I was reminded of the actor who portrayed Doc Holliday in Tombstone (1993), an eccentric, perfect performance.

Here’s an edited version of what I wrote in a previous post after seeing this film at the New York Film Festival:

The Velvet Underground is a group that has meant a lot to me over the years, both for the music and the personnel, specifically Lou Reed and John Cale. After I moved to New York City in 1977, I saw Lou Reed frequently at The Bottom Line and John Cale almost as many times. Their music has been a part of my life for years. Haynes’ film is startling in many ways, both in the often radical way it’s structured and in the depth of the material presented. I learned a lot I hadn’t known about the backgrounds of the people who came to form the Velvet Underground. The cultural scene in New York in the Sixties provided a unique and fertile landscape that expressed itself through film, art, photography, and music. Everything fed into everything else. The importance of Andy Warhol to all this is examined in the film. The amount of material amassed is almost overwhelming. The editing is excellent. The source attributions listed in the lengthy closing credits seem to go on forever. Along with all the archival footage, interviews conducted for the film are interwoven throughout. Haynes said during the Q&A after the screening that they limited new interviews only to people who were there at the time, active in that scene. John Cale is especially great to hear. Maureen Tucker, too.

The Velvet Underground always comes back to the music. I’d forgotten how experimental their sound was, especially during the early years. I think there’s stuff on the first two albums that we still haven’t caught up to yet. Seeing this film reminded me of that. I was quite moved at the end.

Available for streaming on Apple TV+.

That’s all for now. Best TV yet to come. Stay safe. — Ted Hicks

Iowa farm boy; have lived in NYC for 40 years; worked in motion picture labs, film/video distribution, subtitling, media-awards program; obsessive film-goer all my life.
View all posts by Ted Hicks →
This entry was posted in Uncategorized. Bookmark the permalink.