“The Vast of Night” – Something in the Sky

I hadn’t heard of The Vast of Night before reading the New York Times review last May. It sounded very interesting, so I watched it on Amazon Prime two days later. The film is a knockout, a superior piece of work on every level. I watched The Vast of Night again a week later. I intended to write about it then, but experienced a failure to launch, so to speak. Now, two months later, I’m making good on my original intention, albeit a bit rushed. As a refresher, I watched it for a third time yesterday. It’s just as good as it was the first time.

The film’s opening takes us into an empty living room where we see a retro television set with flickering, indistinct images on the screen. We hear a voice that is uncannily evocative of Rod Serling’s introduction to Twilight Zone. The sound and cadences are perfect. We hear the following:

“You are entering a realm between clandestine and forgotten, a slipstream caught between channels, the secret museum of mankind, the private library of shadows – all taking place on a stage forged from mystery and found only on a frequency caught between logic and myth. You are entering Paradox Theater. Tonight’s episode: The Vast of Night.”

Black and white becomes color as the TV screen expands and takes us into the story. The conceit is that what we’re about to see is a TV show. But I don’t know if I take The Vast of Night as an episode on television. Maybe this is a portal into the “real” story. By the way, I love the line “…caught between logic and myth.” This very much applies to The Vast of Night.

Per Wikipedia, the premise is that  “…a young switchboard operator and a radio disc jockey discover a mysterious audio frequency that could be extraterrestrial in origin.” The Vast of Night is set in Cayuga, New Mexico, population 492. The year is 1958. Sputnik, launched into orbit in 1957, is mentioned in the dialogue. Desert settings were popular in science fiction films of the 1950s, such as It Came from Outer Space (1953), Them! (1954), and Tarantula (1955). New Mexico is also where Roswell and Area 51 are located. So the landscape is appropriate for weird stuff to go down. Cayuga is a fictional town, but feels very real.

The first 20 minutes or so is a lot of chitchat that serves to introduce the two main characters and get to know them. Everett Sloan (played by Jake Horowitz) is a disc jockey on a local radio show. He’s probably 19 or 20 and tends to speak in wise cracks. Fay Crocker (played by Sierra McCormick) is a 16-year-old switchboard operator for the phone company. We first meet them in the gymnasium at the Cayuga High School where the first basketball game of the season is about to start. Seemingly the entire town is there.

Fay is smart, a bit twitchy, and often breathless. Her first rapid-fire words to Everett as they leave the gym are these: “Can I bring you my tape recorder so you can show me how it works?” They’re obviously good friends, but Everett makes fun of Fay a lot. He responds with “I don’t know what you just said, Fay. You sound like a mouse being eaten by a possum.”

The camera follows them in a long, low tracking shot that reminds me of Stanley Kubrick’s low tracking shots following Danny Torrence down the halls on his small bike in The Shining (1980). The camera work by Miguel I. Littin-Menz is superb throughout.

Fay is going to her night shift on the switchboard and Everett to the radio station to DJ his “Highway Hits” show. During their walk Fay, excited about scientific predictions she’s read about, is anxious to tell Everett. She chatters on about “vacuum tube transportation…the trains travel between 2000 & 5000 mph in these tubes all across the country. That’s how it’s all gonna be. It’s called vacuum tube transportation. All these tubes, they crisscross all of the world, so we’re gonna sit in cars that run through the tubes like little hotdogs through a garden hose. It’s gonna be everywhere by the year 2000.”

She also talks about self-driving cars with what sounds like a kind of GPS guidance system and tiny TV telephones. Fay says she read about this in Modern Mechanix magazine. This resonated with me because I used to read predictions like this in magazines such as Mechanix Illustrated and Popular Mechanics that my dad would get during the 50s. 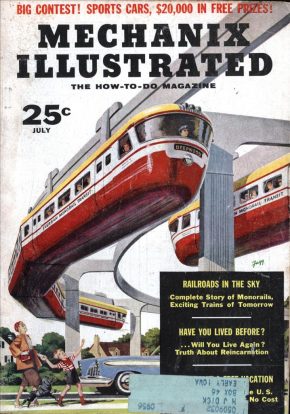 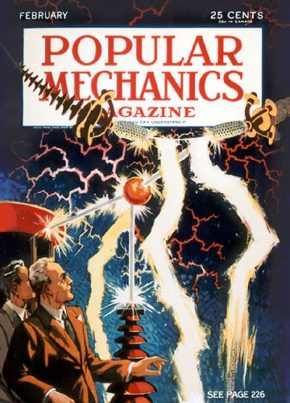 At the switchboard, Fay hears a strange, distorted kind of static on one of her lines. She calls Everett at the radio station to see if he knows anything about it. He tells her to send the signal and he’ll put it on the air, asking listeners if they’ve heard anything like it before. At this point, about 30 minutes in, the story begins in earnest.

After Fay sends the signal, she leaves the board and opens door of the switchboard office to stand in the doorway and light a cigarette. The camera goes past her out the door and begins to glide down the empty street and across open lots, very low. Goes to school gym and enters, the basketball game is in progress. Leaves through a window (I think there’s a cut at this point) and continues tracking through town to the radio station where Everett stands outside smoking a cigarette. The shot ends as a call comes in.

This is a bravura sequence, shot to look like a single take. This kind of thing can call attention to itself; it’s not invisible. But there’s something about it that captures a sense of strangeness and expectation that I think defines the film. This was the moment when I knew I was in good hands, that I was seeing something special. Here, see for yourself.

Everett takes a call from a man named Billy, who says he has heard the sound before. Years before, when he was in the military, he was on a detail with other soldiers who were flown to an undisclosed spot where they buried something large and mysterious in the ground. During this time he heard the sound. In the ensuing years he learns that the sound was being recorded at different times and places, sometimes at altitudes higher than any plane could fly. Billy speaks in a soothing, even voice, but there’s an ominous quality to what he says. As he talks, the image changes to that of the Paradox Theater TV screen, then fades to black entirely as he tells his story. His basically uninterrupted monologue lasts approximately 12 minutes. The sound of his voice is mesmerizing.

Fay, who has also listened to Billy’s account, asks Everett if he believes Mr. Billy’s story. He replies, “I don’t know, but if there’s something in the sky, I want to know.”

They then receive a call from a woman named Mabel Blanche, who lives in Cayuga. She says she can tell them what’s behind the sound, but they have to come to her home to hear it. At 60 minutes in, we go to see Mabel Blanche at 1616 Sycamore. She says things like, “They’ve come here before…the people in the sky.” And then speaks of her son Hollis, who one night walked outside and vanished. Hers is a monologue that, like Billy’s, is hypnotic. And, like Billy’s, it also lasts around 12 minutes.

Fay and Everett encounter a man and woman who have driven in from the desert. The man and woman are alarmed and upset. “There’s something in the sky. Have you seen it? Hiding in the clouds.”

A crowd leaves the gymnasium, game over, unaware of what’s happened. But what has happened? The Vast of Night never quite spells it out, but it comes pretty close.

This is an extraordinary film. With a very low budget of $700,00, the filmmakers have achieved something quite special. I think Steven Spielberg and J. J. Abrams would be impressed. I know I was.

The Vast of Night was directed by Andrew Patterson. It was written by Patterson (under the name James Montague) and Craig W. Sanger. The excellent sound design was by Johnny Marshall and David Rosenblad, with an original score by Erick Alexander and Jared Bulmer. Not to forget the performances of Sierra McCormick as Fay and Jake Horowitz as Everett. They are wonderful.

It would be nice to see this film in a theater, but for the time being you can watch it on Amazon Prime.

This will probably be most useful once you’ve seen the film.

How the long-take prowl around town was achieved.

Anatomy of a Scene: Building Tension with a Strange Sound.

That about wraps it up. See you later. Be safe. — Ted Hicks

2 Responses to “The Vast of Night” – Something in the Sky