“Shooting the Mafia” – An Archive of Blood

“I was saved by photography. I was a young, intelligent, desperate woman. My encounter with photography allowed me to express my thoughts, my rebellion, my social and political commitment.” — Letizia Battaglia

This astonishing documentary, directed by Kim Longinotto, is focused on the remarkable career and life of Letizia Battaglia, an Italian photographer and photojournalist best known for her coverage of the Mafia in her native Palermo, Sicily during the blood-soaked 1970s and 1980s. Letizia narrates the film throughout in voice-over and on-camera interviews, telling her story openly and directly. She doesn’t pull any punches. Archival footage and clips from classic Italian movies are used to support and comment on what she tells us. This film is more of a portrait of Letizia Battaglia than it is about the Sicilian Mafia, though that’s the most sensational aspect of her story.

Unless otherwise noted, all quotes in this piece are hers from the film.

Letizia was born in 1935 in Palermo. She describes a key event from her childhood. As a young girl, when she left the house on her own for the first time, a man exposed himself to her and masturbated. She ran home in shock. She wasn’t allowed out any more. “They stopped me from living, from growing. I was stunted. My father forced me to stay at home. He took away my freedom. All my dreams were shattered like a china cup on the floor. Why do such small things make us suffer all our lives. That awful man in the shadows. To have a father who controlled your whole life. I couldn’t go on the balcony in case a man saw me. All fathers at that time were obsessed. They were scared of other men who’d take their daughter away.”

Ironically enough, she met her future husband on the street. He was rich and eight years older than Letizia, who was sixteen. They married and had three daughters, but she was not happy. Like her father, her husband was controlling. She wanted to go to school, but he wouldn’t let her. She had greater ambitions. “I didn’t want to be just a mother.” They divorced in 1971.

Letizia began taking photographs at age 40. She got a job with L’Ora, a left-wing newspaper in Palermo. She was the first female photographer in Italy to work for a daily paper. “Little by little, I realized I preferred taking photos to writing. I didn’t want to be a journalist. With photography, I could tell my own story. I could feel it rather than understand it… I loved the way I could express myself with a camera rather than writing. I slowly fell in love with it… I loved being a photographer, showing what I’d seen, what I felt inside.”

“At first, I didn’t think about the Mafia. I thought I’d photograph children, women, streets…anything but the Mafia. Three days after I started, I witnessed my first murder. This was a story that lasted 19 years at the newspaper in Palermo.”

“At times, there were 5 murders a day. Once there were 7, all in the same place. We’d never known a slaughter like it. It was civil war in Palermo. In one year, they killed about 1,000 people. Every day I thought they might shoot me. I got used to it, accepted it. They smashed my cameras. I was spat at. I got death threats over the phone. I got anonymous letters. It was good to be a bit crazy. It gave me courage. I am brave, I see that now.”

When Letizia Battaglia says she is brave, this is a statement of fact, rather than ego.

“There were times when fear took over. I don’t want to think about pain. My photos of the Mafia, of the dead. I wanted to burn them…I dreamed of burning my negatives, but I have no right. I want to take away the beauty that others see in them. I want to destroy them… I look at my photos, it’s just blood, blood, blood.”

“Kids dream of being important. Perhaps being a killer is a game, but it’s how they hope to be powerful. The killer is a symbol for them.” 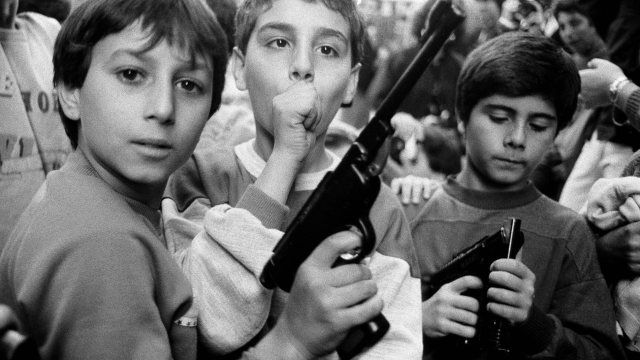 I made a note when I saw it that the film is like a thriller. It becomes most like one when the Mafia starts killing judges. At first, it was Mafia killing Mafia. Later, they killed men from the establishment. “First, they killed Judge Scaglione. Then it was one after another. It was too much.” Another judge was murdered near her newspaper office. We meet Judge Giovanni Falcone, who brought hundreds of Mafia members to court. A huge Mafia trial in Palermo in 1987 had 474 defendants who observed the proceedings from cages in the back and sides of the courtroom. This footage is something to see.

Letizia refers to  Falcone as a modern hero.“We kept telling him, ‘They’ll kill you.’ He’d say, ‘Don’t worry. If I die, others will take my place.’”

Falcone, his wife, and a number of his bodyguards were killed in a highway bombing on May 23, 1992. Two months after Falcone’s death, his close friend and colleague Judge Paolo Borsellino was killed on July 19.

Letizia says of Falcone’s death, “I couldn’t take any photographs. I didn’t want to tell any more stories in blood. I loved Falcone so much. He was one of the really good people. I couldn’t photograph him dead. Now I think, ‘Why not?’” And then, to the off-camera film director: “Why are you making me think about this? I don’t want to. I realize now I’ve never been at peace. It’s always been like this. My life has always been a struggle.”

Letizia Battaglia comes across as a definite piece of work, a truly individual character, a force of nature. She’s pursued her life with passion and enthusiasm, and a strong sense of justice. Someone says in the film, as we see Letizia being warmly greeted by people on the street, “Letizia is a legend. A flash of red hair, bobbing up and own at rallies. She’d always cause a stir.”

“It’s nice when your work is appreciated, but success tires me out. I prefer love. Recently I’ve met someone… I was 38 when he was born.” She’s referring to Roberto Timperi, a photographer. They’re together now. A previous long-term relationship was with another photographer, Franco Zecchini, who was 22 when he met Letizia in 1974 when she was 40. 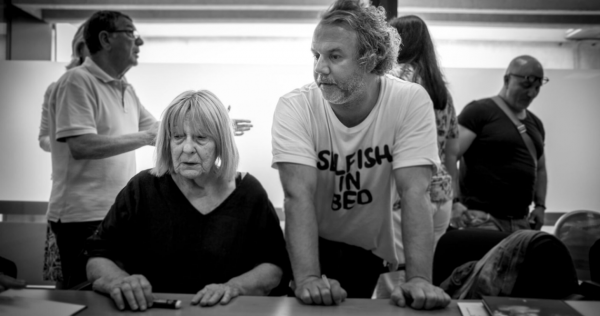 “I don’t feel guilty. I know my behavior hasn’t pleased my children, my lovers, my friends, but I’m not guilty of anything. I was committed to my work. I did my best. People who disapproved can fuck off.” (Like I said, she doesn’t pull any punches.)

After describing Shooting the Mafia to my wife Nancy, she said it sounded like a film that would only be made by a woman. I hadn’t thought of it like that, but she’s right. I can’t overstate my enthusiasm for this film. I hope that comes through in this piece. — Ted Hicks 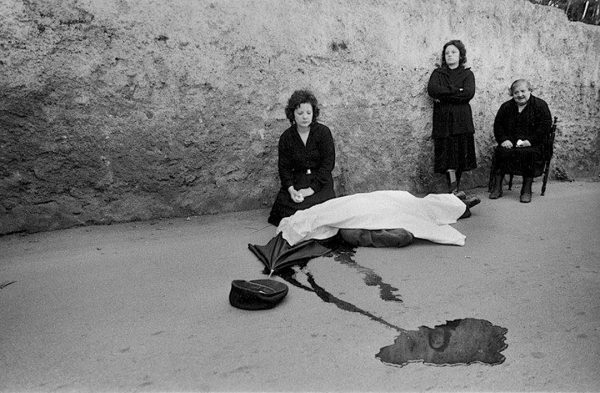 “Suddenly, I had an archive of blood.” — Letizia Battaglia

Shooting the Mafia opens at the Quad Cinema in New York on Friday, November 22.

3 Responses to “Shooting the Mafia” – An Archive of Blood