As I stated in Part 1, I saw hundreds of films while I was growing up. These are some of the ones I remember from 1953.

This was the year of 3D and CinemaScope. I remember when the Vista Theater installed a new screen for the opening of The Robe in September of ’53. This was a big event. 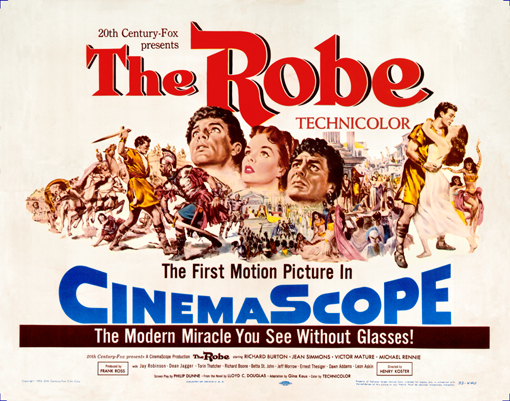 A promotional ad touted the wondrous features of this new format. 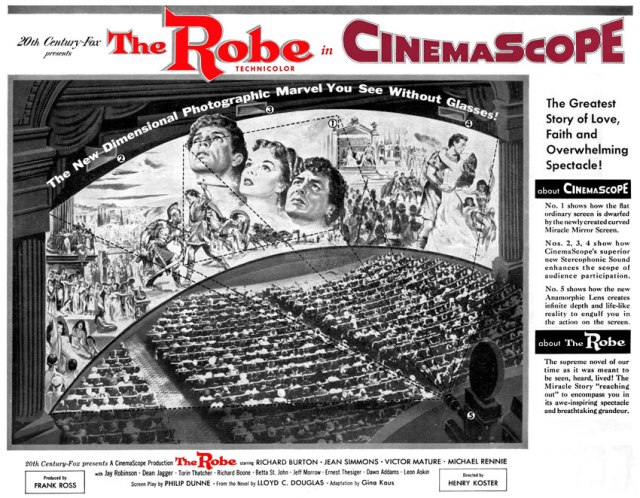 I saw The Robe again a few years ago and was struck by how static it is. There were few close-ups and very little camera movement. Filmmakers hadn’t yet learned how to use the wide screen frame. The Robe kicked off a flood of ‘Scope productions. Almost all of the ads for these films contained some variation on the excited statement, “You see it without glasses!” 3D films were very big at the time, but you had to wear glasses, so this was playing against that. Both formats were obviously an anxious reaction to the growing threat of television.

I always got a kick out of hearing the CinemaScope fanfare at the beginning of 20th Century Fox films. I still do. 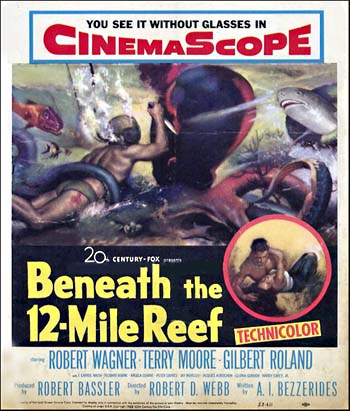 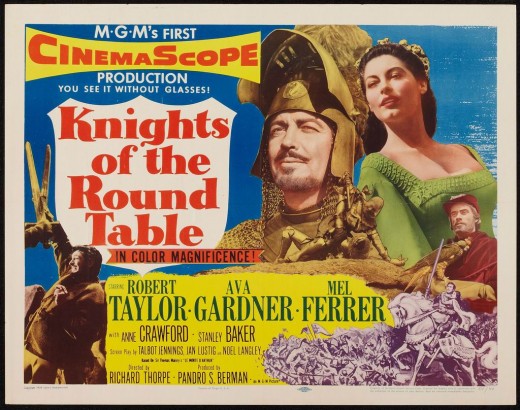 The 3D craze exploded in ’53.  One of the most effective uses of the process was House of Wax, which is ironic when you consider that the director, Andre De Toth, had only one eye. The poster below gives you some idea of the subtlety of the film’s marketing. 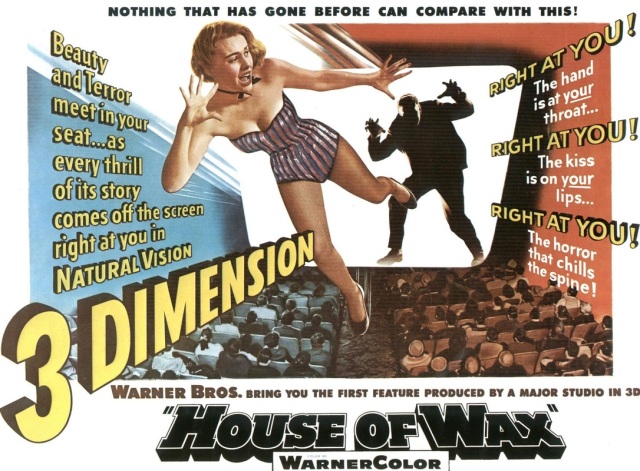 I wouldn’t have seen this Italian poster for House of Wax in the 50s, but I couldn’t resist including it here. It’s beautiful. 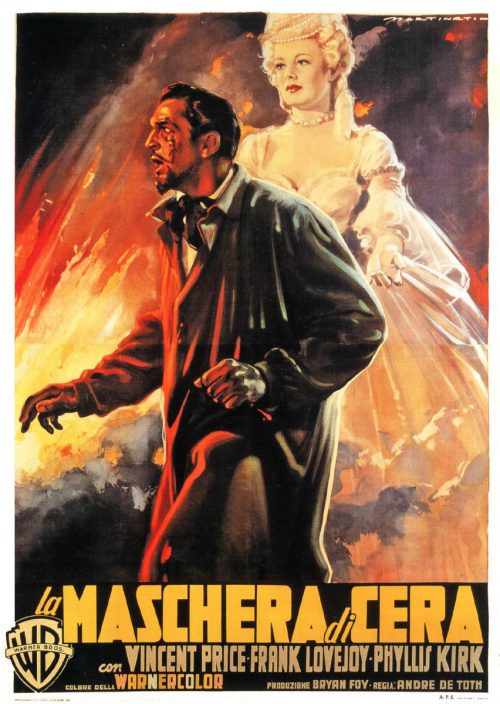 It Came from Outer Space, directed by Jack Arnold, was one of the more literate science-fiction films of the period, though I doubt I appreciated that aspect at the time. 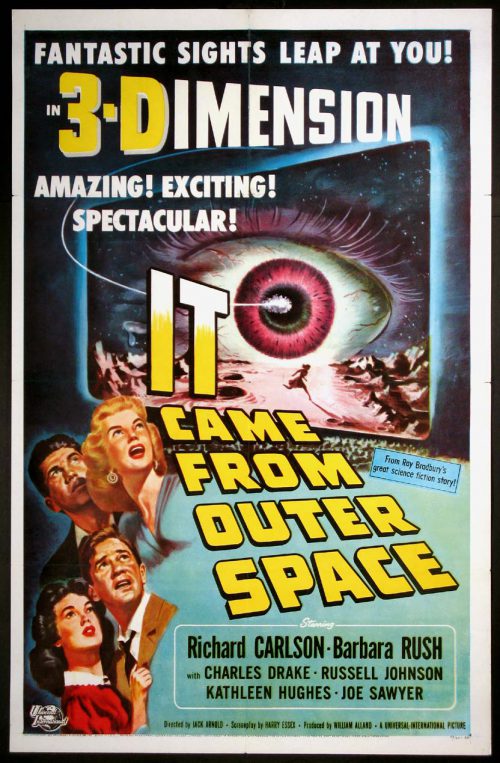 The use of 3D in most of these films was just a gimmick, but not always. Inferno shows the struggle to survive of a man (Robert Ryan) who is left to die in the desert by his wife (Rhonda Fleming) and her lover (William Lundigan). I remember seeing Inferno in 2D at the Vista Theater. A few years ago I saw it in a 3D series at Film Forum, and was struck by how 3D was used in a non-gimmicky way to draw the audience into the space depicted on the screen, rather than throw stuff out of it. Though the poster below makes sure you know it’s in 3D. It’s only in the last reel that chairs and torches start flying out of the screen, as though the filmmakers suddenly remembered they were making a 3D film. 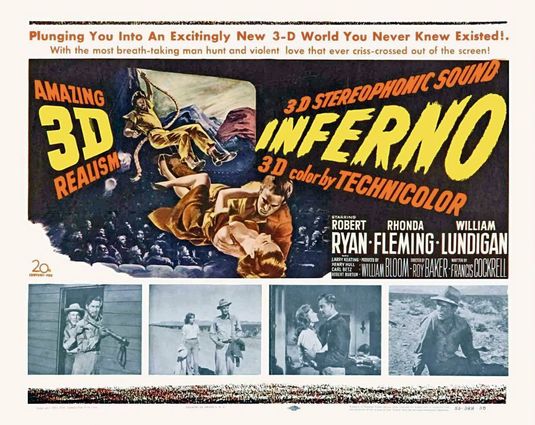 A film I was particularly enthralled by was The Beast from 20,000 Fathoms. It was one of the first of the creature-on-the-loose movies that I saw (generally revived dinosaurs or giant insects). I didn’t know who Ray Harryhausen was at the time, but his stop-motion work in this and many other films was quite magical. Here is a clip from the film that captures the hand-made charm of this technique. It shows the dinosaur picking a policeman up in its jaws and swallowing him, then stomping a car flat and casually brushing it aside. I love it. 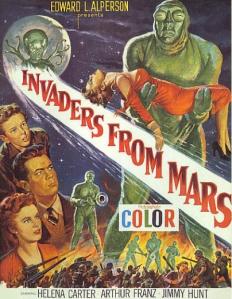 I was 8 years old when I saw Invaders from Mars, about the same age as the protagonist, David, a young boy who sees a flying saucer land in a field beyond his house and burrow into the ground. The Martians begin taking over the local human population via implants in the back of the neck. David’s parents are among the victims. He’s the only one who has a sense of what’s going on, but who’s going to believe him? He’s just a kid. Eventually a scientist and his girlfriend do believe him and somehow enlist the army to thwart the Martians. I saw Invaders from Mars again a few years ago, and it’s pretty bad. But what does work is what worked then — having David’s parents, previously loving and supportive, become something “other.” The film exploits a fear that your parents are not who you thought they were. Invasion of the Body Snatchers would explore this theme much more powerfully in 1956. But until then, this one did the job. 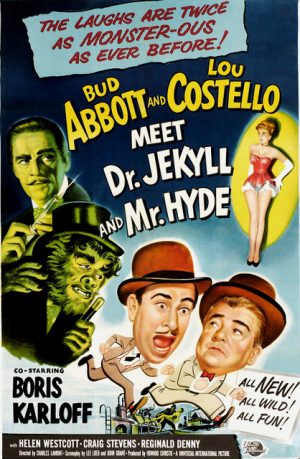 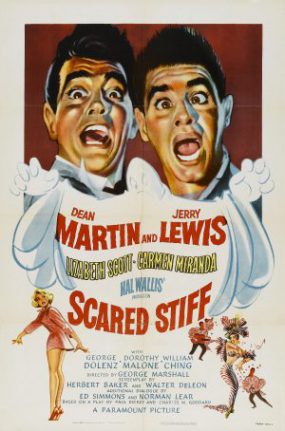 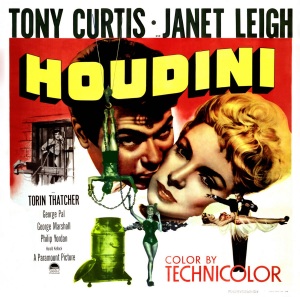 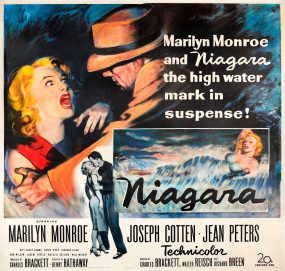 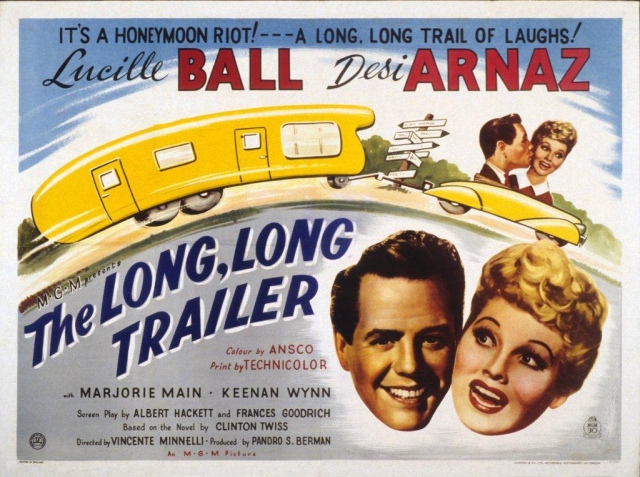 My anticipation for Peter Pan and The War of the Worlds was intense. I couldn’t wait to see them. They did not disappoint. There was a lot of merchandising related to Peter Pan. Disney really exploited this market. The Little Golden Book below looks very familiar, so I’m sure I had a copy. 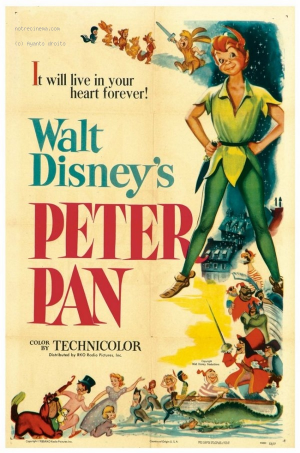 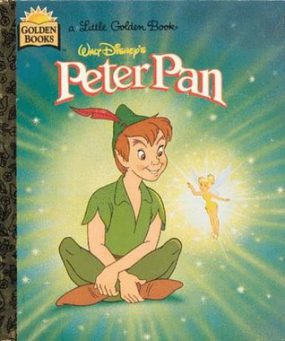 Of all the films in this post, Shane is the one that has stood the test of time. It’s a truly great film. I didn’t know that when I first saw it, I just knew that I liked it tremendously. George Stevens directed many fine films; Shane is one of his best. The music score by Victor Young, leisurely majestic and deeply moving, is crucial to the feeling I have for this film.

The cast is stellar from top to bottom, with Alan Ladd in the title role bringing humanity and decency to the character of a gunfighter who’d rather not use his gun. But of course, the Western genre dictates that he must, and we wait in anticipation of the inevitable. Jack Palance (billed as Walter Jack Palance) brings a reptilian deadliness to the role of Jack Wilson, a hired gun for the cattle baron trying to drive homesteaders off their land. Here’s a key scene with Wilson confronting the hotheaded “Stonewall” Torrey, played by Elisha Cook, Jr. 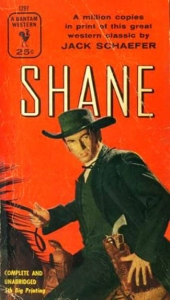 Shane was based on a 1949 novel by Jack Schaefer. After seeing the movie, I bought a paperback edition for the princely sum of 25 cents and doubtless read it several times. I was a bit thrown by the depiction of Shane on the cover, since his appearance was a radical departure from that of Alan Ladd in the film.

My wife Nancy doesn’t like most genre films, including Westerns. Some years ago I kept pressing her to watch Shane with me. I was convinced that its obvious excellence would win her over. I told her that if she didn’t like it, I would never ask her to see another Western. So we watched it. When it was over, I turned to her and hopefully said, “Well, what did you think.” She shrugged and said, “It was okay.” I was taken aback. Shane was just okay? But a deal’s a deal, and that was that. Too bad, though. I still haven’t been able to get her to watch The Bride of Frankenstein. I have a feeling that’s not gonna happen.

I like it that some of the films I saw as a young boy have stayed with me all these years. Shane is certainly one of them. 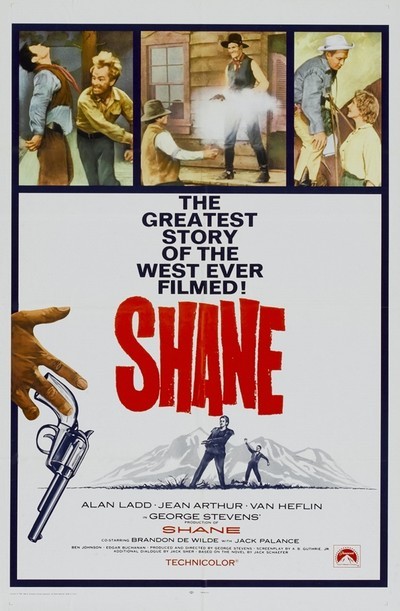 I had initially thought to finish “My Movie Life” in two parts. That’s neither manageable nor practical, considering I have three more years to cover. My intent is to wrap it up in two more parts, ending with 1956. Please bear with me. – Ted Hicks