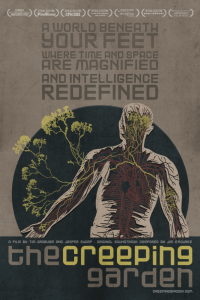 The Creeping Garden – Directed by Tim Grabham & Jasper Sharp. This documentary from the U.K. is about the wonders of slime mold. Who knew? The trailer, which grabbed me from the first time I saw it, promises something weird and alien, unknown but to a dedicated few; in other words, yet more proof that the world has more dimensions than I can even begin to imagine. This could be from a 1950s science fiction film. A few days ago, I watched Tarantula (1955), about a giant spider on the loose in the Arizona desert, and Them! (1954), about giant ants also on the loose. I have a feeling that actual slime mold will be just as bizarre. The Creeping Garden opens in New York at Film Forum on Wednesday, September 30 for a one-week run.

Taxi – Directed by Jafar Panahi, the celebrated Iranian director whose films win awards but are usually banned in his native country. His films have put him in conflict with the Iran government for years, and in 2010 he was arrested and sentenced to a six-year prison term and a 20-year ban on making films. He was subsequently released under house arrest; he can travel freely in Iran, but can’t leave the country. None of this has kept Panahi from making films. In 2011, using a digital camcorder and an iPhone, shooting over a ten-day period inside his apartment, he made the extraordinary This Is Not a Film. Per a title at the end of the film, it was then smuggled out of Iran on a flash drive hidden inside a birthday cake to be shown at the Cannes Film Festival (The flash-drive-in-a-birthday-cake statement was widely believed to be true, but per an article by Rachel Donadio in the September 27 New York Times, Panahi’s friends now say this was a joke and that the film was sent to Cannes by other means. If so, too bad, because it makes a great story). Panahi followed up This Is Not a Film with the equally amazing Closed Curtain (2013). Like the previous two, Taxi is a dislocating combination of documentary and fiction. I wasn’t sure what, if anything, was staged and what wasn’t; but it doesn’t really matter. In any event, Taxi received the top prize, the Golden Bear, at this year’s Berlin International Film Festival. The film takes place entirely inside a taxi, which Panahi drives around Tehran, having conversations with people he picks up. This setup recalls two films by another great Iranian director, Abbas Kiarostami: Taste of Cherry (1997) and Ten (2002), both of which take place inside taxis. Taxi opens in New York at Lincoln Plaza Cinemas and the IFC Center on Friday, October 2.

In Jackson Heights is the 40th feature documentary by Frederick Wiseman, a  filmmaker whose importance cannot be overstated. This 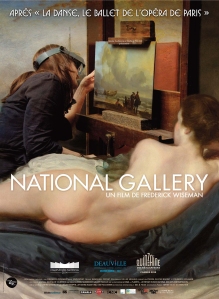 is Wiseman’s third film in three years from, preceded by the four-hour At Berkeley in 2013, the three-hour National Gallery in 2014, and now In Jackson Heights, which clocks in at three hours, ten minutes. Substantial running times are necessary to Wiseman’s films, where we’re immersed in institutions and communities. He’s interested in seeing how things work, without voice-over commentary, interviews, on-screen titles, or judgement. Wiseman just puts us there and let’s us see for ourselves. In Jackson Heights is set in a Queens, New York, neighborhood of incredible diversity where 167 languages are spoken. Here is a description from Film Forum’s calendar and website:

“In the course of his brilliant, nearly half-century career, Frederick Wiseman has tackled both great social institutions (a prison for the criminally insane, high school, military, police, juvenile court, the welfare system) and cultural ones (La Comédie Franҫaise, the Paris Opéra Ballet, American Ballet Theater, London’s National Gallery). Here he profiles a community, Jackson Heights, one of New York’s most diverse neighborhoods, with immigrants from Peru, Colombia, Mexico, India, Bangladesh, and Pakistan (167 languages are spoken) — as well as elderly residents of Jewish, Irish and Italian extraction. Under the elevated train, a hodge-podge of stores sell whole baby goats, saris, and Bollywood DVDs; they offer HIV testing, Tibetan food, and classes for would-be cabbies. Jackson Heights is home to an activist LGBT community, to recent survivors of terrifying border crossings, students of the Quran, and small shop-owners who mobilize against the Williamsburg-ization of the nabe. Wiseman embraces a community that revels in still being affordable, 20 minutes from ‘the city,’ and resolutely unhip.”

In Jackson Heights will be shown at the New York Film Festival on October 4, and begins a two-week run at Film Forum on November 4.

Drunk Stoned Brilliant Dead – Directed byDouglas Tirola. This documentary about the surreal rise and fall of National Lampoon is fascinating. Like me, if you’re old enough to have read the magazine as it was being published, this film will resonate. The main title sequence, punched up by David Bowie’s “Jean Genie” on the sound track, is a dense montage of covers and inside pages. It’s a killer. The rest of the film never quite matches the energy of this opening, but it’s incredibly entertaining and informative, with lots of interviews and great visuals. Drunk Stoned Brilliant Dead opened on September 25 at the IFC Center in New York.

The Forbidden Room, directed by Guy Maddin and Evan Johnson, is completely insane — and I think that’s a conservative estimate. The film drove me crazy while I was watching it, and I remember thinking I’d never want to see it again. But it’s stayed with me. The Forbidden Room is some kind of demented epic. And that’s a good thing. It’s like a dozen narratives in a salad spinner that never stops. Stories spin off of stories and back again, then off again, on and on. We’re never any one place for long. At times it looks like an old silent film with degraded images and suddenly melting frames; or it feels like a 1930s serial, or a Krazy Kat cartoon, or every Monty Python episode mashed together with experimental cinema of the 1960s. Everything is heightened, everything is filtered, nothing is real. Charlotte Rampling, Udo Kier, Geraldine Chaplin, and Mathieu Amalric are among the many actors who turn up in these multiple realities. The Forbidden Room is a unique experience. It’s also very funny. 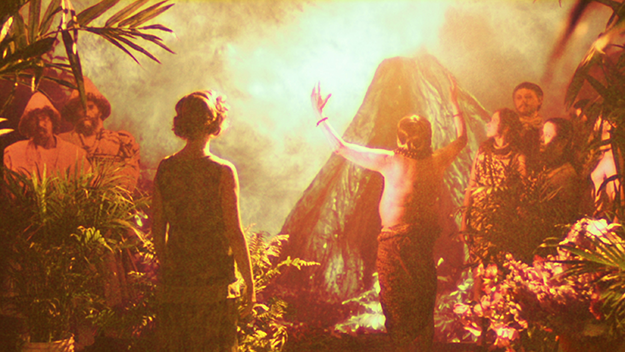 The first Guy Maddin film I saw was Careful in 1992. I knew right away it was something very different, though compared to The Forbidden Room, it’s a model of narrative cohesion. Careful takes place in the 1880s in an Alpine village that’s under constant threat of sudden avalanches. So delicate is the balance that everyone has to whisper and not make any noise, which is very funny given the extreme melodrama of the story line. Maddin has an unusual sensibility, and his films have a home-made quality that’s probably not easy to achieve. The Forbidden is being shown at the New York Film Festival and begins a two-week run at Film Forum on October 7.

Mississippi Grind is the fourth feature written and directed by Anna Boden and Ryan Fleck. I haven’t seen their third film, It’s Kind of a Funny Story (2010), but the first two, Half Nelson (2006) and Sugar (2008), are great. In Half Nelson, Ryan Gosling plays a history teacher and girls basketball coach at a Brooklyn high school in who also has a drug problem. This is the first time I’d seen Gosling, and he really got my attention.  In Sugar, a young Dominican baseball player gets signed by a pro baseball team in the States and sent to a farm team in Iowa. In these films, and now in Mississippi Grind; nothing is forced, the narratives proceed at a relaxed, unhurried pace, filled with incidents more than plot points. Everything feels very natural. 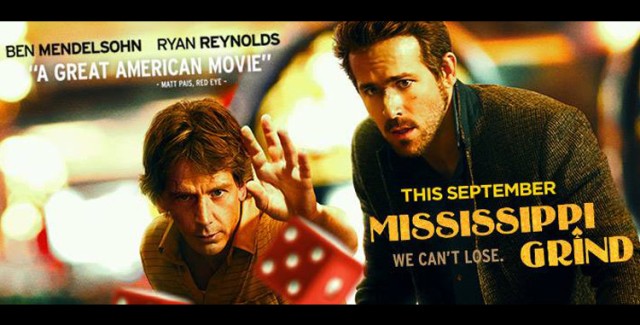 In Mississippi Grind (great title), Gerry (Ben Mendelsohn) and Curtis (Ryan Reynolds) meet at a poker game in Dubuque, Iowa. Gerry practically has “loser” stamped on his forehead, but Curtis seems like he might be more together. They obviously enjoy each other’s company, and ultimately hook up for a road trip to New Orleans, where a high-stakes poker game awaits. Ben Mendelsohn was amazing in the Netflix series Bloodline, and he’s terrific here, as is Ryan Reynolds. Plus the soundtrack is filled with excellent blues music. Mississippi Grind is currently showing in theaters, and will also be available for streaming from iTunes on October 13. It will be released on home video on December 1. Don’t miss this one. – Ted Hicks