When I heard that Christopher Lee had died on June 7, my first thoughts were of The Curse of Frankenstein (1957) and Horror of Dracula (1958), the two British films that made him a star and forever associated Lee with horror films and the character of Dracula in particular. To say these films had a huge impact on me would be a gross understatement. As I stated in the first installment of Famous Monsters and Me (5/17/12),  I became obsessed with horror and science fiction at a very early age. The years 1957 and 1958 were of key importance due to the release of these two films; the appearance on television in October ’57 of Shock Theater, a syndicated package of 52 horror and mystery films from the ’30s and ’40s; and the first issue of Famous Monsters of Filmland in early ’58, which tied it all together.

Horror and science fiction films seldom had regular runs in the movie theaters where I lived in Iowa. I usually learned of their existence from movie ads in the Des Moines Register. I would clip these ads from the paper, day after day. They would diminish in size as the films got closer to the end of their runs, but I’d cut them out anyway. I kept the ads in a scrapbook (long gone, alas). Not everything played in Des Moines theaters, but The Curse of Frankenstein and Horror of Dracula did. It was frustrating that it could take weeks or months before such films made it to second- and third-run theaters in smaller Iowa towns — if at all. There they might get a short run at one of these theaters or the local drive-in. Often it was just a single midnight showing, usually on a Friday night.

I don’t remember the exact circumstances of seeing The Curse of Frankenstein, but I saw Horror of Dracula as a midnight movie at the Vista Theater in Storm Lake, Iowa, sometime in 1959. (The theater is still there! They added two smaller screens some years back in an adjacent space, but the lobby and original auditorium are just as I remembered them.) The logistics of pulling this off were formidable. Until I was old enough for a driver’s license, which was a year or two away at the time, I had to persuade someone with a license and a car — who also liked these movies — to take me. This involved much sucking up and selling how great this one was sure to be. Once I’d done this, I still had to get my dad’s permission to stay out that late, which was always a challenge since he usually needed me to help with farm work the next day. From my dad’s point of view, my anxious need to be scared to death by vampires in undead living color did not take precedence over cleaning out the hog house on Saturday morning. In this particular case, all the effort was worth it, because Horror of Dracula took the top of my head off with how great it was. It was terrifying and thrilling, and I loved it.

I’d already seen The Curse of Frankenstein, which had a huge impact on the genre, and on me as well. It inspired me to attempt to create my own monster, or at least a life-size figure of one. I got an old pair of my dad’s coveralls, which I began stuffing with straw in the attic of our garage. I stopped work on this project before I got around to fashioning a head for the body. I think I lost enthusiasm when I realized my dad was not about to let me hang this thing from the yard light that extended from the roof of the garage. However, it did have a life of sorts a couple of years later when it was tossed into a bonfire at a school pep rally the night before the big homecoming game.

Curse was Hammer Films’ first horror film in color. Prior to this, most horror and science fiction films had been shot in black and white. Color gave a rich texture to the period Gothic setting and created quite a sensation at the time, including outrage in some quarters at the amount of blood and gore on screen. This seems tame when seen today, but in 1957 and ’58 it was definitely something new.

The Curse of Frankenstein and Horror of Dracula really put Hammer Films on the map, along with the stars, Peter Cushing and Christopher Lee. In Curse, Cushing plays Victor Frankenstein, a role he was to vividly inhabit a total of six times. As the Creature, Lee has no dialogue, but he makes a strong impression, as can be seen in the following scene of his entrance in the film:

Christopher Lee and Peter Cushing appeared in a total of 22 films together, though in the first two — Hamlet (1948) and Moulin Rouge (1952) — they had supporting roles in separate scenes. The Curse of Frankenstein was their first film as co-stars; from then on they were the main attractions.

Horror of Dracula was released in the U.K. as Dracula. It was retitled for release in America apparently to avoid confusion with the the Bela Lugosi Dracula (1931). Peter Cushing is billed above the title, while Lee gets a “with Christopher Lee” credit below Michael Gough and Melissa Stribling on the second credits screen. I’ve seen this film many times over the years, most recently a couple of weeks ago on DVD. The heavy chords of James Bernard’s opening music over the slow, inexorable tracking shot down stone steps into a sub-level crypt always give me a thrill and a chill and a sense of dread anticipation as the camera moves in to a closeup of the Dracula nameplate on a heavy stone crypt, climaxed by blood splattering on the letters. I found the film to be even more effective this time than I’d remembered.

Terence Fisher (1904-1980) directed these two films, as well as most of the best Hammer horror films, including The Revenge of Frankenstein (1958), The Mummy (1959), The Brides of Dracula (1960, a Dracula film without Dracula), The Curse of the Werewolf (1961, with Oliver Reed as the title character), and Dracula: Prince of Darkness (1966). Fisher’s contribution to the Hammer horror films can’t be over-estimated.

Lee appeared as Dracula in a total of nine films, all but two of them for Hammer. After the first one it was eight years before he agreed to play the role again, in Dracula: Prince of Darkness. He has no dialogue and is almost a peripheral character in the film. I like it because it has a lot of atmosphere and some terrific scenes, but Lee is not the seductive, ferocious, alien, truly iconic figure that he was in Horror of Dracula. Lee is right to disparage the subsequent Hammer Dracula films. In interviews he makes it sound like he was practically forced to be in these films, but who knows?

As an actor, it seems that Christopher Lee never lacked for work. Per IMDb Lee has 206 feature film credits from 1948 to 2015, and many television credits from 1955 to 2008, as well as lending his distinctive voice to

video games from 1994 to 2015. Though he’ll always be best known as Dracula, he also appeared as the villainous Fu Manchu in five films from 1965 to ’69. This was when Western actors could still get away with playing Asian roles, as Peter Lorre had done with the detective Mr. Moto and Boris Karloff had in Fu Manchu films from the ’30s. Lee portrayed Rasputin in Rasputin: The Mad Monk (1966), a film I’ve not seen but would like to. He was in Hannie Caulder, a western with Racquel Welch in 1971,  and a Bond villain in The Man with the Golden Gun (1974). He was Rochefort in Richard Lester’s The Three Musketeers (1974), The Four Musketeers (1974), and The Return of the Musketeers (1989), and more recently in several Tim Burton films, including Sleepy Hollow (1999) and Dark Shadows (2012).

I was surprised to learn that he’d had a singing career as well, recording opera and other musical pieces between 1986 and 1998. This was followed, bizarrely enough, with a series of heavy metal albums from 2005 to 2013. He referred to these as “symphonic metal.” This is covered in a piece from The Daily Beast that appeared last month.

Christopher Lee worked right up to the end of his life at age 93. We should all be so lucky. He’s probably best known to younger audiences for his roles as Count Dooku in two of the films in the Star Wars prequel trilogy (2002 and 2005), and as Saruman in The Lord of the Rings and The Hobbit trilogies. I loved seeing him in other films, but they always reminded me of the first time I’d seen him in The Curse of Frankenstein and especially in Horror of Dracula. I was sad when I heard that he’d died, but it’s not like he’s really gone. We have the films. — Ted Hicks

Here is Christopher Lee talking about his career.

Christopher Lee hosted Saturday Night Live on March 25, 1978. He appeared in sketch called “Mr. Death” with Jane Curtin and Loraine Newman. I was unable to find a clip, but here’s a link to the transcript of that sketch. It’s pretty good. 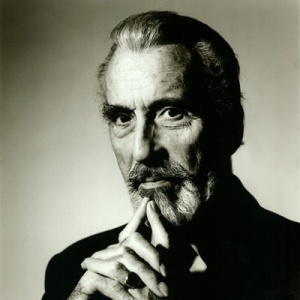 Note: All of the films referenced in this post are available on home video for rental or streaming.

2 Responses to Famous Monsters and Me – Pt. 4: Christopher Lee