On the Merry-Go-Round: A Month of Movies 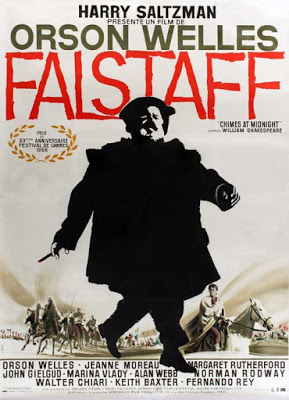 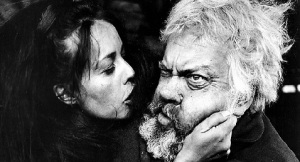 Sunday, February 1st. I headed down to Film Forum for the 5:30pm showing of Orson Welles’ Chimes at Midnight (1965), aka Falstaff, considered by many to be Welles’ greatest achievement, and which Welles himself has called his best film. Since I’d never seen it before, and since it’s rarely screened and currently unavailable in this country on home video (except as an import), I thought I’d better check it out while I had the chance. I found much of the dialogue — taken from five of Shakespeare’s history plays — difficult to follow, though this may have as much to do with my hearing as anything else. But visually it’s amazing, as you’d expect from Welles.

Tuesday, February 3rd. Back to Film Forum for the final day of the five-week Welles series to see A Man for All Seasons (d. Fred Zinnemann, 1966), in which Welles makes a brief but powerful appearance as Cardinal Wolsey. I don’t think I’d seen this since the initial release in ’66. This film won six Academy Awards, including Best Picture, Best Director, and Best Actor. Paul Scofield is great in the lead role Sir Thomas More, as is Robert Shaw as Henry VIII. But there’s a bit of an embalmed feeling to the film seeing it now. 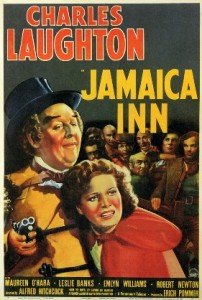 Friday, February 6th. Off to Film Forum again for a 4K digital restoration of Jamaica Inn (d. Alfred Hitchcock, 1939), which kicks off a three-week series of Charles Laughton films. This is a rare period piece for Hitchcock. He’d already made The Man Who Knew Too Much (1934), The 39 Steps (1935), and The Lady Vanishes (1938), which are unmistakably Hitchcock films, but it’s hard to see his hand anywhere in Jamaica Inn. Nonetheless, it does crank up a fair amount of tension and excitement in the climactic sequence. Maureen O’Hara is quite good in her film debut, but Laughton’s performance is overcooked beyond belief.

Saturday, February 7th. Seeing Losing Ground (d. Kathleen Collins, 1982) at the Walter Reade Theater. My wife read about this film, which was part of a series from the Film Society of Lincoln Center called “Tell It Like It Is: Black Independents in New York, 1968-1986,” and thought it sounded interesting, so we went. The Film Society’s website describes it as “…one of the first feature films written and directed by a black woman, and a groundbreaking romance exploring women’s sexuality, modern marriage, and the life of artists and scholars.” There’s a kind of roughness to the production, but the film is carried by strong performances and the dynamics of the situations.

Charles Laughton’s Captain Bligh is pretty definitive, though his performance seems a little overdone. This is probably reflective of the more theatrical acting styles often seen in films of this period. Clark Gable’s and Franchot Tone’s performances are restrained by comparison, and somewhat more relatable. It’s a rousing story, and everything leads to the mutiny, but I didn’t like it as much as I remembered when I’d seen it before.

Wednesday, February 11th. Once more in residence at Film Forum, this time for the start of a week-long series of ten features directed by John Boorman, starting with Point Blank (1967), one of my favorite films. This is a kind of sunshine noir, set in San Francisco and Los Angeles, with Lee Marvin as the vengeful Walker, possibly back from the dead or dreaming, who just wants the money he was cheated out of by the best friend who shot him and took his wife in the bargain. Influenced by European filmmaking styles in terms of editing and structure, Point Blank put Boorman on the map with only his second feature, and it’s a showcase for Lee Marvin in one of his most iconic roles. Here’s a clip of Marvin in one of the all-time great screen entrances (he appears in scenes before this in the film, but this is his real entrance).

Thursday, February 12th. Jupiter Ascending (d. Andy & Lana Wachowski) had been pretty thoroughly trashed in reviews, but I guess I just had to see for myself, so I went to the AMC Loews Lincoln Square multiplex for a mid-morning showing. The movie is truly insane, and not in a good way. The Wachowskis made a huge impact with The Matrix (1999), a film I really love. But they failed to follow though with The Matrix Reloaded and The Matrix Revolutions (both 2003), sequels that are tiresome and ridiculous. Cloud Atlas (2008) was visually stunning, but grossly overdone. The

Wachowskis are world builders who somehow manage to get super-huge budgets to make movies, though after the thud of Jupiter Ascending, it will be interesting to see if they can continue to do so. Mila Kunis spends a good deal of the film falling from great heights while suffering no damage whatsoever. Channing Tatum, an actor who 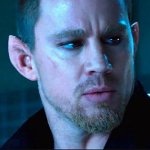 has impressed me in a wide variety of roles, here looks more like an elf-man than the genetically-engineered wolf/man hybrid he’s apparently supposed to be. It’s hard to take him seriously with those ears. And Eddie Redmayne is probably lucky that Academy voters didn’t see him in this film before voting on his performance in The Theory of Everything.

to Film Forum (again!) to see two more films in the Charles Laughton series: The Old Dark House (1932) and Devil in the Deep (1932). I normally don’t choose to see three films in one day, but sometimes it happens. The Old Dark House, directed by James Whale with his usual playful touch, is more of a farce than a horror film, though it was marketed as such by Universal. Disparate groups of travelers are forced by a severe storm to take shelter in a house inhabited by a totally off-kilter family. To say they’re eccentric is putting it mildly. In his first American film, Laughton is part of an ensemble cast that includes the great Ernest Thesiger, Raymond Massey, Gloria Stuart, Melvyn Douglas, with Boris Karloff as a mute, alcoholic butler who lurks about the premises lending a horror movie vibe. 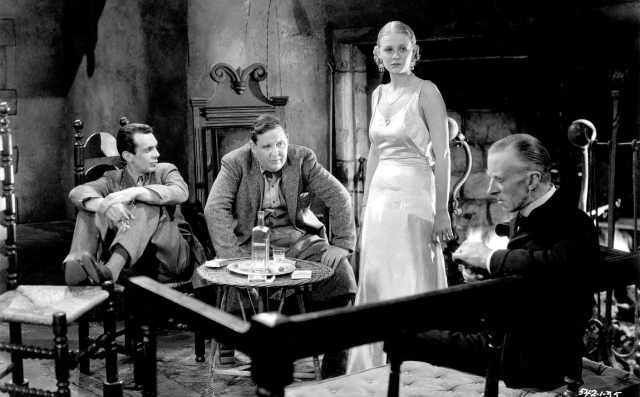 I’d seen The Old Dark House once or twice before, but had never heard of Devil and the Deep. The casting is intriguing. Laughton plays a jealous submarine commander based in North Africa, with Tallulah Bankhead as his deeply unhappy wife, and Cary Grant and Gary Cooper as naval officers.  She is drawn first to Grant and then Cooper, after the insanely jealous Laughton has had Grant transferred far away. My interest was mainly in seeing Grant and Cooper at this early stage in their careers. Laughton was once again over the top, but effectively so. For me, the film is more of a curiosity than anything else. 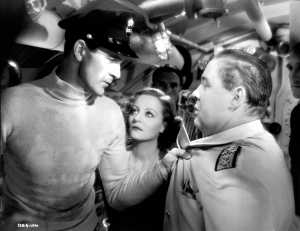 Friday, February 13th. What We Do in the Shadows at the Landmark Sunshine Cinema. I’d been wanting to see this since I first heard about it last year. Written and directed by Taika Waititi and Jemaine Clement, who also act in the film, What We Do in the Shadows takes the form of a faux-documentary being shot in a house shared by four vampires in New Zealand as they go about their daily (or nightly) undead lives. Much of their existence is taken up by very mundane stuff — such as arguing about who has been slacking on his assigned chores, not doing the dishes, etc. This is all very funny, given the context. What We Do in the Shadows is definitely a comedy, albeit one with lots of splattered blood.

Saturday, February 14th. At the AMC Loews 84th Street 6 to see Kingsman: The Secret Service (Director/Writer: Matthew Vaughn). I’d been looking forward to this and was not disappointed. One of the kicks is seeing an actor like Colin Firth in a secret agent action

film loaded with James Bond gadgetry and exploding heads. For me the centerpiece of the film is a massacre in an evangelical church in the South set to the instrumental break from Lynard Skynard’s “Free Bird.”  This is the best use of that song since Robin Wright teetered on the edge of a high-rise balcony contemplating suicide in Forrest Gump (1994). This movie may have no redeeming social value whatsoever, but what a rush that sequence is!

Sunday, February 15th. A total change of pace with Gett: The Trial of Viviane Amsalem at Lincoln Plaza Cinemas. Ronit Elkabetz and Shlomi Elkabetz have written and directed this film about the efforts of an Israeli woman (played by Ronit Elkabetz) to obtain a divorce, or “gett,” from her husband. In Israel, only a rabbinic court can sanction marriages and grant divorces. The husband has all the power; if he doesn’t agree to the divorce, the court can’t force him. Viviane is frustrated every step of the way, in a process that drags on for five years as her husband Elisha refuses to grant the divorce. The filmmakers’ approach is minimalist and controlled. We are never out of the small courtroom or adjacent waiting areas. There are no windows or decorations in the rooms, no distractions whatsoever. Music is used sparingly and to great effect. This film wears you down and makes you angry, but it needs to be seen.

In the interest of time, space, and attention span, I’m going to speed this up a bit for the remaining films.

Thursday, February 19th. Timbuktu at Lincoln Plaza Cinemas, directed by Abderrahmane Sissako. A.O. Scott’s review in the New York Times provides context that I wish I’d had going in, but it’s an extraordinary film in any event.

Friday, February 20th. Queen and Country at Film Forum, directed by John Boorman. This is great, the latest and possibly final film from this director. I plan to write about it and other Boorman films at a later date.

Tuesday, February 24th. Seymour: An Introduction, directed by Ethan Hawke. This is a wonderful documentary focusing on a truly special soul, pianist Seymour Bernstein. I plan to write about this film when it opens on March 13th. It soars with Seymour’s spirit. The music is so unbelievably beautiful that it’s almost supernatural. 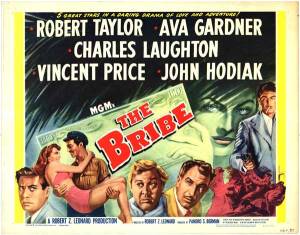 Thursday, February 26th. Film Forum again for the final day of the Charles Laughton series with Advise & Consent (1962, directed by Otto Preminger). This was  Laughton’s final film; he died six months after it was released. Laughton is excellent as a cantankerous Southern senator. Walter Pigeon is also very good in a large cast that includes Henry Fonda, Peter Lawford, Burgess Meredith, and Gene Tierney. It was interesting seeing this film the day before Netflix began streaming the third season of House of Cards. The political manipulations, in-fighting, and backstabbing don’t seem all that different from then to now.

Friday, February 27th. Maps to the Stars at the IFC Center, directed by David Cronenberg. Cronenberg got his start making science-fiction horror films that were a cut far above the usual fare. But even when his films are set in the so-called “real” world, they tend to convey exceedingly strange, uneasy feelings. This film is no exception. No one can create a sense of dread in ordinary settings the way Cronenberg can. Julianne Moore is great in this.

That’s all for now. See you at the movies. — Ted Hicks

3 Responses to On the Merry-Go-Round: A Month of Movies