“A Most Wanted Man” & “Double Indemnity” – Top of the Line

A Most Wanted Man – Sunday, August 3 at AMC Loews Lincoln Square. I love spy stories in films, TV shows, novels & non-fiction, but I’m sure my most immediate reason to see A Most Wanted Man was to watch Philip Seymour Hoffman in the last full performance we’re going to have from this amazing actor. He’s so good in the film, as he always is, that it made me both sad and angry to realize that this is it. I was somewhat startled looking at a list of his films to see all those titles together and realize what a great body of work he’d created by the time of his death at age 46. A partial listing of these films, titles that jumped out at me, include Boogie Nights (1997), The Talented Mr. Ripley (1999), Magnolia (1999), Almost Famous (2000), Capote (2005), Before the Devil Knows You’re Dead (2007), The Savages (2007), Synecdoche, New York (2008), Doubt (2008), The Master (2012), and A Late Quartet (2012). When I think of his a cappella rendition of  “Slow Boat to China” near the end of The Master, or having a cocaine-fueled meltdown in Before the Devil Knows You’re Dead, it makes me crazy to realize we won’t see what he might have done over the next 20 or 30 years.

A Most Wanted Man is the third feature directed by Anton Corbijn and written by Andrew Bovell, based on the John Le Carré novel. Corbijn’s previous features were Control (2007), a profile of Ian Curtis, the lead singer with the band Joy Division who committed suicide at age 23, and The American (2010), with George Clooney as a contract killer in Europe. Corbijn’s controlled, slow-burn approach was a good match for Le Carré. A Most Wanted Man also reminded of what I think is one of the best adaptations of a Le Carré novel, The Spy Who Came in from the Cold (1965).

As Günther Bachman, the head of a covert intelligence operation in Hamburg, Hoffman is rumpled, short-tempered, possibly alcoholic, and totally focused on getting the job done. Hoffman’s performance isn’t at all flashy; but it is just about perfect. The narrative of A Most Wanted Man is set in motion by Issa Karpov (played by Grigoriy Dobrygin), a recently imprisoned and tortured half-Chechen, half-Russian Muslim who has illegally entered Germany. In a post-9/11 world, Hamburg is especially paranoid about the agenda of anyone who fits Issa’s profile. The German government, the CIA (represented by a cold-eyed Robin Wright with a bit of an echo of her steely Claire Underwood on the House of Cards Neflix series), and Bachman’s own organization are all competing to locate Issa and determine the truth of why he is in Hamburg. The film takes its time. The pace is deliberate, but far from boring (unless you need something blowing up every five or ten minutes to hold your interest).

I thought it might bother me that this was another film in which everyone, regardless of nationality, speaks English. But it didn’t distract me at all. There’s something different about Hoffman’s accent in particular. Whatever it is, it works. In a piece in the New York Times this past July 17, John Le Carré describes his visit to the set of A Most Wanted Man and his impressions of Hoffman, at the end of which he talks about Hoffman’s accent in the film. It’s definitely worth reading.

A Most Wanted Man was shown at the Sundance Film Festival on January 17, 2014. Below is an excerpt from a press conference with Hoffman, cast members Willem Dafoe and Rachel McAdams, and director Anton Corbijn following the screening from. I wish the entire press conference was available, but this is very interesting nonetheless. Seeing Philip Seymour Hoffman in this clip and knowing that he died three weeks later on February 2 is a weird kind of disconnect. What an unnecessary loss.

Double Indemnity (1944) – Monday, August 4 at Film Forum. Director: Billy Wilder. Co-Writers: Wilder and Raymond Chandler. Film Forum wrapped up its terrific “Femmes Noirs” series with a week’s run of this great film, a key early entry in the “classic” noir cycle (Double Indemnity was scheduled to end on August 7, but has been held over through Thursday, August 14, when the equally great The Killing [Stanley Kubrick – 1956] and Gun Crazy [Joseph H. Lewis – 1949] return for a week’s run through August 21. All three are digital restorations and have never looked better).

Double Indemnity set the template for many noirs to follow. Wise-cracking insurance salesman Walter Neff (Fred MacMurray) gets involved with Phyllis Dietrichson (Barbara Stanwyck), a bored housewife who uses Neff to help kill her husband and collect the insurance money. As Neff says in his confession to claims adjuster Barton Keyes (Edward G. Robinson), recorded on a Dictaphone in his office as he bleeds out from a gunshot wound, “I killed him for the money, and for a woman. I didn’t get the money… and I didn’t get the woman.” That’s usually how it works out for most noir protagonists.

Here is a clip of the beginning of that confession. This scene begins just a few minutes after the opening credits, so I don’t consider it a spoiler. The rest of the story is told in flashback via Neff’s confession.

The cast is uniformly great. For anyone who grew up seeing Fred MacMurray as the father on the TV series My Three Sons (1960-1972) or in Disney films such as The Absent-Minded Professor (1961) or Son of Flubber (1963), seeing him in something like Double Indemnity can be quite a jolt. He’s perfect, as is Barbara Stanwyck, whose role as the manipulative Phyllis Dietrichson set the bar for femme fatales, and that’s saying something. Edward G. Robinson is terrific as the brilliant claims adjustor Barton Keyes, shrewd, cynical, and a closet softee, with a “little man” inside who alerts him when something is amiss. His final scene with MacMurray is a punch to the heart.

Everything seemed to come together for this film. Much like Casablanca (1942), there was a happy confluence of director, script, and cast. Based on the novel by James M. Cain, Double Indemnity was the third feature directed by Billy Wilder in this country. His began his career as a screenwriter in Germany in 1929. Like many German directors (Fritz Lang, Robert Siodmak, and others), Wilder got out when the Nazi Party began to come to power. He directed his first feature, Mauvaise Graine (1934), in Paris, before moving to Hollywood, where he had his first hit writing the screenplay for Ernst Lubitch’s Ninotchka (1939). After Double Indemnity, Wilder went on to direct such classics as The Lost Weekend (1945), Sunset Blvd. (1950), and Some Like It Hot (1959). Wilder co-wrote Double Indemnity with novelist Raymond Chandler, whose Philip Marlowe came to personify the image of a private eye in the public’s mind. Their working relationship was reportedly rocky, but you can’t argue with the result. Chandler went on to write the screenplay for Alfred Hitchcock’s Strangers on a Train (1951), though he requested that his name be removed when it turned out that virtually nothing of his work remained in the finished film. Hitchcock readily agreed (his relationship with Chandler was apparently even worse than Chandler’s with Wilder), but Warner Bros. refused because they wanted Chandler’s name on the film.

Another important component of Double Indemnity is Miklos Rozsa’s score. It’s value to the film cannot be over-estimated. The music is heard at its most forceful during the opening credits, creating an inexorable momentum and emotion that drives the story and its characters to what feels like an inevitable conclusion. The theme weaves in and out of the film and never lets go. As Walter and Phyllis repeatedly say to each other to underscore their determination to stick it out together, “Straight down the line.”

I especially like the tag line on the poster below at left: “You can’t kiss away a murder!” That’s a pretty hard-boiled line, befitting the film. I also can’t resist including a couple of great foreign posters for Double Indemnity. This film is available for streaming or rental via Netflix and for streaming or purchase from Amazon. If you haven’t seen it, you should. – Ted Hicks 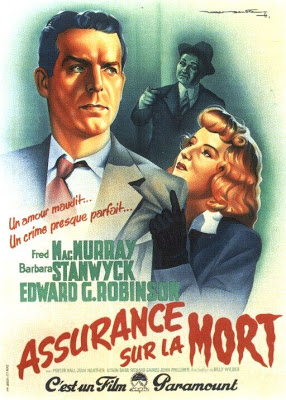 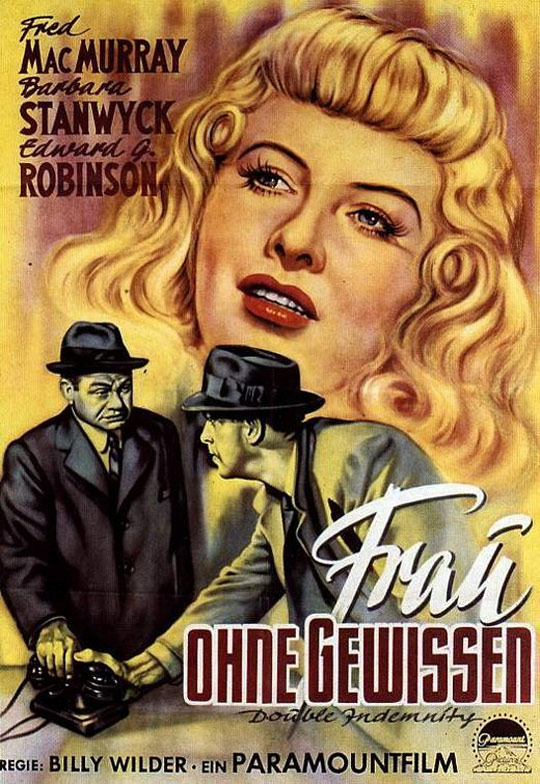