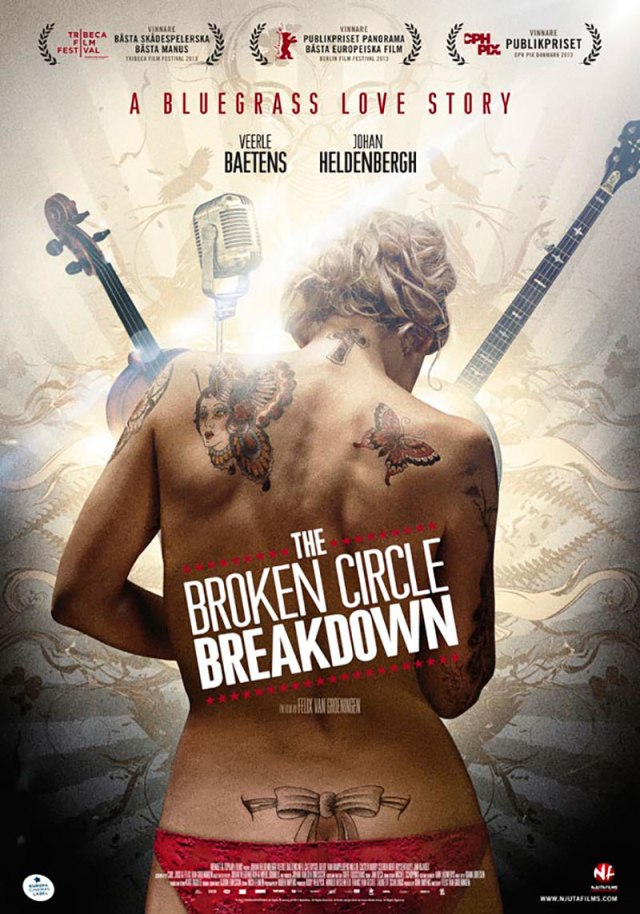 The Broken Circle Breakdown has been playing in New York since last November, and though initial write-ups made me very interested, mainly because of the bluegrass-in-Belgium angle, I didn’t get around to seeing it until a week ago. I went into The Broken Circle Breakdown without knowing much about it, other than that it was about the relationship over a period of years of a man and woman who play in a Belgium bluegrass band. I’d scanned some early write-ups, but had basically forgotten any details. Generally, the less I know about a film before I see it, the better.  As it turned out, there were many moments in The Broken Circle Breakdown that really took me by surprise, so much so that I was glad I hadn’t known too much beforehand. It’s a challenge to write about any film – and especially this one – without giving too much away, but I’ll give it a shot.

I was completely knocked out by The Broken Circle Breakdown, most powerfully by a final scene that completely bypassed my “intellect,” went straight to my emotions and hit me square in the gut. I see a lot of movies, but rarely have a reaction this intense or sudden, something that slips by too fast to get filtered through my brain. The last time I can remember this happening was during the investigation hearing at the end of Flight (2012) when Denzel Washington finally comes clean.

The advertising refers to The Broken Circle Breakdown as “A Bluegrass Love Story,” which it is, but it’s also much more than that. The film concerns Didier, who loves bluegrass music and plays in a local

band; his wife Elise, who works in a tattoo parlor and sings in the band; and their young daughter Maybelle, named for Maybelle Carter. It opens with the three of them in a hospital, then cuts back seven years to the time when Didier and Elise first meet. The film continues to cycle back and forth in time in a way that slowly reveals how the characters get to where they do. This looping temporal structure is one of effect and cause, rather than a more sequential cause and then effect. A scene will show us where they are today, then we jump back in time to see the roots of that. This is not a new technique, but the way it’s used here feels different. The layered narrative is revealed in stages; this takes awhile, so it grows on you.

Bluegrass music is at the heart of The Broken Circle Breakdown in much the same way that jazz permeated David Simon’s great HBO series Treme, but that’s not what it’s about. That would be how a family either endures a tragedy or is broken by it. There’s a heartbreaking darkness here, and the music weaves in and out to comment on that and also lift it. For as much as death hangs over this film – we see 9/11 coverage on TV in a flashback, for example – it’s also filled with joy, love, and life, which makes the heartbreak even more intense. The film itself is like a bluegrass song. The music often has a mournful quality, as in the following clip, which features Veerle Batens (excellent as Elise), with Didier watching from the side. (This clip has several shots that require a SPOILER ALERT, so use your own discretion.)

The Broken Circle Breakdown was directed and written by Felix Van Groeningen, and based on a play co-written by lead actor Johan Heldenbergh. Heldenbergh, tall and bearded, brings a strong and sometimes anxious, wounded presence to the role of Didier. When Didier first meets Elise in the tattoo parlor where she works, he’s living a rustic, quasi-hippie lifestyle in the country on a sort of farm with chickens on the loose and assorted livestock wandering about. He and Elise hit it off right way – it’s basically love at first sight. In short order she falls in love with both Didier and bluegrass, and becomes the lead singer in his band.

There’s a great moment from a flashback to early in their relationship when Didier is breaking down the genealogy of bluegrass instruments for Elise. I wish I could remember what he says more clearly. He talks about each instrument, how the fiddle has a Celtic source, that the banjo evolved out of an African instrument, and how he loves the way the banjo “snarls.” He speaks with the focus and enthusiasm of someone who truly knows and loves a subject. 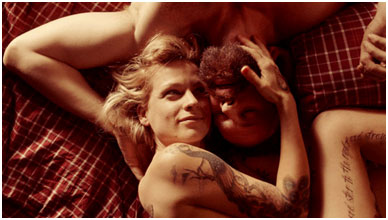 The following synopsis of the film at the IMDB site really nails it.

“Elise and Didier fall in love at first sight. She has her own tattoo shop and he plays the banjo in a bluegrass band. They bond over their shared enthusiasm for American music and culture, and dive headfirst into a sweeping romance that plays out on and off stage – but when an unexpected tragedy hits their new family, everything they know and love is tested. An intensely moving portrait of a relationship from beginning to end, propelled by a soundtrack of foot-stomping bluegrass, The Broken Circle Breakdown is a romantic melodrama of the highest order.” Written by Tribeca Film

I strongly recommend this film. It will lift you up and it will wipe you out. I promise. How often do you get that combination in one film? – Ted Hicks

The Broken City Breakdown is still screening in theaters, as well as available now on iTunes and Amazon Instant Video. A DVD will be released for sale and rental on March 26.