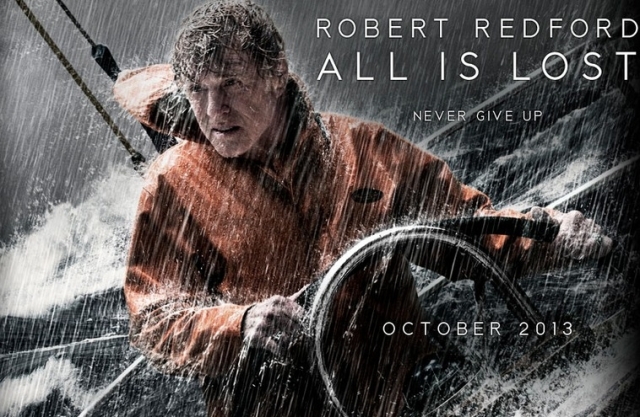 I’m still fresh from the impact of seeing All Is Lost several days ago. I think it’s a really great movie, and might be the best film I’ve seen so far this year. The story is as basic as it gets: a man alone, adrift in a damaged sailboat on the ocean, struggles to survive. It’s as simple as that. But saying that All Is Lost is about a man trying to survive alone in the ocean doesn’t begin to convey what it’s like watching the movie.

This is only the second feature written and directed by J.C. Chandor. His first film, Margin Call (2011), has a large ensemble cast of great actors and lots of talk; the action is in the dialogue. It’s a very smart, terrific film. At first glance it couldn’t be more different from All Is Lost, but it, too, is about survival, as members of a large investment firm struggle to save the company over the course of a long, dark night.

All Is Lost opens with a close-up of the side of a shipping container. The motion and sound of water lapping indicate it’s afloat somewhere. We hear a voice — Robert Redford’s — reading what sounds like a letter that’s been written his family, probably, though this is never specified.  He says that he always tried to be good and do right, apologizes for his failures and the disappointments he’s caused, and says “I’m sorry” several times. His voice is tired, resigned, sad, and nearly broken. And that’s it. Those are nearly the only words we hear him say during the entire film, as well as the closest we get to any kind of backstory on this guy and why he’s here.

At the end of the letter, there’s an on-screen title stating “Eight days earlier.” We see Redford in his cabin waking up to water pouring into the boat through a breach in the hull. A shipping container carrying a cargo of sneakers has rammed his sailboat, the Virginia Jean, the sea water damaging his communications and navigation equipment. On deck, we see sneakers bobbing in the water.

In a recent piece in the New York Times by Maureen Dowd on Redford and the film, he says of his understanding of the character: “He’s got a conscience. Clearly he has a family. He’s not a bad person, but he’s failed in some way. So maybe this journey has to do with him sorting all that out.” Redford also says he didn’t think about dying while making this film; he thought about enduring.

I don’t think I’ve ever seen anything quite like this in a theatrical motion picture. It’s practically experimental, especially for an American film, totally stripped down. The script was only 31 pages long and the film cost under $10 million to make (which is considered very low budget these days). Story and character are reduced to the most basic elements. The film doesn’t give us anything beyond what’s on the screen. There’s no voice-over, no narration; he doesn’t talk to himself or, like Tom Hanks in Castaway, to a soccer ball named Wilson. A more conventional film might have included flashbacks to fill out the story, tell us who this guy is and why he’s by himself in the middle of the ocean. He doesn’t even have a name. It’s only in the closing credits that we see Redford’s character is called “Our Man.” Not “A Man” or “The Man,” but “Our Man.”

I only have two minor reservations about All Is Lost. One is that there were times as I watched him go from one exhausting task to the next, one after the other, I wished for something more, or maybe different, from the film, which by its very nature it wasn’t going to provide. The other is that I really liked the music score by Alex Ebert, but there’s a song with lyrics under the closing credits, which felt wrong for a film with virtually no spoken words. But as I say, these are minor.

Redford’s Our Man has nothing but himself to count on, which is also true for Redford as an actor. He can’t rely on the Redford charisma in this film, or at least not the charisma we’ve come to know. Both actor and character are all alone in All Is Lost, which nothing to fall back on, no dialogue, no other characters or any kind of backstory. It’s a performance that’s almost like an act of survival in itself. Robert Redford is 77 years old. He’s been a huge movie star, an Oscar-winning film director, and founder of the Sundance Institute and the annual Sundance Film Festival. At this point in his life, it’s amazing that he would be willing to put himself on the line like this. He certainly didn’t have to do it. The result is probably the best performance of his long career, and totally different from anything he’s done before.

It’s been pointed out elsewhere that All Is Lost shares its survival theme with three other excellent films currently in theaters: Captain Phillips, Gravity, and 12 Years a Slave (I’ll leave it to others to speculate on what it is in the zeitgeist that might account for this.) Earlier films in this vein include 127 Hours (2010), Into the Wild (2007), and Cast Away
(2000). These are all terrific films, but none of them are as pure in their approach and style as All Is Lost (Gravity probably comes the closest). Survival is boiled down to life or death, nothing else. There is a total focus on staying alive, with no distractions of any kind.

Redford’s character is a man who doesn’t lose his cool under pressure. When he discovers water pouring into his boat, he takes steps to repair the hull and bail out the water. His communications are shot, except for a brief moment when the radio stutters to life and he tries sending an SOS. “This is the Virginia Jean. Can anyone hear me?” is one of the few times we hear him say anything. We see him reading a book called Celestial Navigation for Yachtsmen, and unpacking a sextant, which has obviously not been used before. But he knows what to do, he’s prepared, he’s capable. Though there comes a point, in the face of an approaching storm, when he takes the time to shave, as though to ward off the uncertainty he must now be feeling. This is an extraordinary moment in the film.

We learn from the charts he consults that he’s somewhere in the Indian Ocean. He manages eventually to cross into the shipping lanes,  but the two ships he sees pass by despite his efforts to signal them. (The first is a Maersk Line container ship, which is a bit of a jolt, since that’s the same shipping line that Tom Hanks’ character works for in Captain Phillips). It’s as though he’s invisible.

Our Man is in desperate straits nearly all the time, and at some point must realize his chances of surviving are all but non-existent. This is probably when he writes the letter we hear at the film’s beginning. A moment that really got to me is when he folds the letter and puts it in a jar, but hesitates to throw it overboard, as though reluctant to let it go. Then he almost casually flips the jar out of his hand into the sea.

Despite the nuts and bolts physicality of this film — everything is in the moment — there’s finally a spiritual, or metaphysical, aspect here (if you want to see it that way) that reminds me of the transcendent ending of The Incredible Shrinking Man (1957), as weird as that may sound.

His life becomes one of damage control, having to deal with one problem after another, as things get worse and worse. It’s not just about survival; every minute Our Man remains alive is a kind of victory. Whatever happens, he will have done everything he could. — Ted Hicks

Here’s a segment from a press conference at the Cannes Film Festival earlier this year:

And from an interview from earlier this month (neither of these contain spoilers):

Finally, there’s a piece on the Slate website by Forrest Wickman that definitely does contain spoilers. It’s a discussion of the ending. I strongly advise not reading this if you haven’t seen the film, but the piece is very interesting if you have.

5 Responses to “All Is Lost” — Unique & Amazing