Breaking Bad — “I Am the Danger” 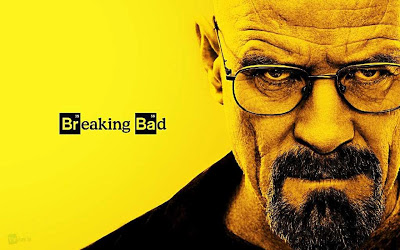 (Though the term “spoiler alert” is overused, that’s what this is. If you haven’t seen Breaking Bad, or are still in the early seasons, be advised that the links, clips, and interview segments below may contain spoilers. Proceed with caution.)

Becoming a Breaking Bad fanatic didn’t happen overnight for me. I’d decided I didn’t want to watch this new series even before the first episode premiered in January of 2008. I didn’t think I’d be interested in a protagonist who cooked and sold crystal meth. I don’t know why this bothered me, since I loved The Sopranos, which was populated mainly by murderously violent criminals, and Omar Little, a stone cold killer, was one of my favorite characters on The Wire, one of the greatest television series ever. So I’m not sure why Breaking Bad‘s premise — a high school chemistry teacher in Albuquerque learns he has terminal cancer and becomes a high-end drug dealer so his family will have money after he dies — put me off to the point of not even being willing to check it out.

At the time I wasn’t aware of Vince Gilligan’s work on The X Files, a series I’d liked a lot, so when I saw that he was the creator of Breaking Bad, it didn’t mean much. I didn’t know who he was or what he’d done. Bryan Cranston I knew from Malcolm in the Middle, and wasn’t sure how well the actor who was the largely clueless, doofus dad in that comedy series was going to work in such a different setting. Well, I found out in both cases. Based on the continuing achievement of Breaking Bad, Vince Gilligan is definitely an equal with the three Davids: Milch (NYPD Blue, Deadwood), Simon (Homicide: Life on the Street, The Wire, Treme), and Chase (The Sopranos). They’ve all created great work that has lasting value. Bryan Cranston’s portrayal of Walter White is amazing, simply astounding. As Vince Gilligan put it in his pitch to networks when he was trying to get Breaking Bad off the ground, the series would show the transformation of  Walter White from Mr. Chips to Scarface. We see the journey of a fundamentally decent man who becomes capable of the most heinous acts, which he repeatedly justifies by claiming that everything he does is for the welfare of his family. Watching him walk this line is both frightening and fascinating. Here is a scene between Walter and his wife, Skylar (the equally excellent Anna Gunn) from episode six of season four. It contains the signature lines, “I am the danger,” and “I am the one who knocks,” which are chilling in context.

As I said before, I came late to the party. I was hearing great things about the series, and began to think I might be missing something, that I should catch up with it at some point. I still hadn’t seen it by April or May of last year. By that time, four seasons had already been telecast, and the prospect of starting from the beginning was daunting. But then a friend of mine sent us DVD sets of the first three seasons, and it became a little harder to keep putting it off. A couple of weeks after receiving the DVDs, my wife and I started watching and were hooked immediately. We burned through those three seasons, and then the fourth, which I knew I had to buy. We finished the fourth season a couple of weeks after season five began airing on July 15, which I was recording. We quickly caught up, and then had to suffer the hardship of having to wait a week between each new episode. The term “binge viewing” has lately caught on, and it’s an excellent description, because that’s what it feels like.

The final eight episodes begin airing on Sunday, August 11. There’s been a blitz of Breaking Bad activity here in New York City the past week or so. The Film Society of Lincoln center ran marathon screenings of the first five seasons, one season a day. This was described as an “experiment in communal binge viewing.” The screenings were free and drew overflow crowds. Last Sunday night we went to the Museum of the Moving Image in Astoria, where we saw Vince Gilligan being interviewed by Charlie Rose in a sold-out event. That interview can be viewed here: http://www.charlierose.com/watch/60247981

A Times Talk event took place on Tuesday at the New York Times building with Vince Gilligan and cast members interviewed. It was sold out, but we were able to watch it at home via live streaming. It was terrific. The cast’s comments, often very funny, offered an opportunity to go behind the scenes with them, and gave me the feeling we were getting to know them apart from their characters on the show. The affection they obviously feel for one another is contagious. Here’s a link to the discussion (this takes you to an NYT Arts page; you can start the video from there; the intro takes several minutes, but the wait is worth it): http://artsbeat.blogs.nytimes.com/2013/07/30/live-video-bryan-cranston-vince-gilligan-and-others-on-the-end-of-breaking-bad/?ref=arts&_r=0

After we finished watching this, I checked my email and discovered I’d won a pair of tickets

for an advance screening of the first of the final eight episodes, which begin airing on August 11. This took place at the Walter Reade Theater the following night on July 31, which also happened to be my birthday. What an unexpected present. It was great. Vince Gilligan and the cast were in attendance, along with — and this was surreal — Keith Richards, Lou Reed, David Chase, and Warren Buffett, among others in the crowd. We had to sign confidentiality agreements to get in, so I can’t reveal anything about the episode even if I wanted to. All I can say is, it definitely does not disappoint.

Bryan Cranston has made Walter White’s transformation from a high school chemistry teacher to hardened criminal truly something to behold. It’s hard to single anyone out, because the entire cast is so good, but my favorites are Aaron Paul as Jesse Pinkman, Walter’s partner (and surrogate son) in the meth business (for me the moral center of the show), and Jonathan Banks as Mike Ehrmantraut, a fixer and deadly hitman, scary and oddly lovable.

Breaking Bad is an amazing series. I don’t think there’s been a false step in the 54 episodes that have aired to date. The show is challenging, inventive, and surprising at nearly every turn. By now it’s become part of the culture, much as The Sopranos did before it. You know you’ve arrived when 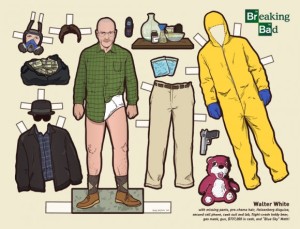 you’re referenced on The Simpsons and people are coming up with Walter White paper dolls.

All great feature films and television shows succeed mainly because they create rich, dimensional characters, and put them in compelling situations that connect with an audience. Breaking Bad is both immensely entertaining and deeply disturbing. Vince Gilligan has said, “We want to make people question who they’re pulling for, and why.” He has also said that the larger lesson of the series is that “actions have consequences.” Breaking Bad, along with The Sopranos and The Wire, is a sustained narrative accomplishment equal to the best works of literature.  The series is almost over, but I’m thrilled to have been along for the ride. – Ted Hicks

Episodes of Breaking Bad are available for streaming via Netflix and Amazon.

Here’s a link to the official AMC Breaking Bad website.

4 Responses to Breaking Bad — “I Am the Danger”