Pennebaker, Dylan, and All the Rest 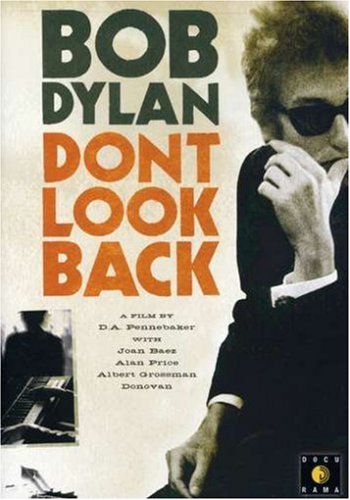 Last weekend we saw Dont Look Back (1967) at the Museum of the Moving Image, with director D.A. Pennebaker there for a Q&A after. I thought the opportunity to see the film on a big screen with the filmmaker in attendance was too good to miss. (The lack of an apostrophe in the title is deliberate, but despite having seen the film quite a few times over the years, this is the first time I ever noticed it, having been alerted by the Wikipedia entry.)

Filmed over 11 days in April and May of 1965 during his U.K. concert tour, Dont Look Back shows us Dylan in the process of evolving out of the role of a more traditional singer/songwriter of protest songs. The half-acoustic, half-electric Bringing It All Back Home had already been released. Later that year Dylan would record the epic “Like a Rolling Stone” and make his third appearance at the Newport Folk Festival, where he would seriously upset a lot of folk purists by unleashing several electric numbers. (Another fascinating film that documents Dylan in the process of becoming “Bob Dylan” is Murray Lerner’s The Other Side of the Mirror: Bob Dylan Live at the Newport Folk Festival 1963 – 1965. It’s well worth seeing.)

Dont Look Back gets your attention right away with a kind of prototype music video. We hear “Subterranean Homesick Blues” on the sound track as Dylan stands in an alley, staring blankly at the camera and discarding cards bearing hand-written words from the song’s lyrics as it plays. There’s a homemade, improvised vibe to this, fresh and funny. This clip of the opening has a DVD commentary from Pennebaker and Bob Neuwirth on how the scene was put together. 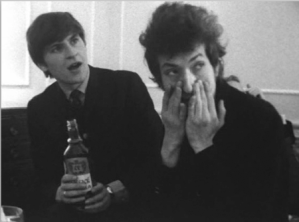 Seeing Dont Look Back this time, I was struck by how boring and tedious life on the road during this tour must have been. We see Dylan in a seemingly endless series of hotel rooms that are always crowded with the many friends, hangers-on, and sycophants who swarm around him. He’s never alone. Members of his entourage that Dylan seems to take seriously are Joan Baez, who disappears from the film half-way through (this is reportedly when they broke up as a couple), Alan Price (who had recently left The Animals and would later go on to write and perform a great score for Lindsey Anderson’s O Lucky Man [1973]), his manager Albert Grossman, and Bob Neuwirth, Dylan’s constant shadow and yes-man.

I was also struck, once again, by how nasty and unpleasant Dylan could be at times. The  condescending way he takes apart the “science student” (Terry Ellis, later a co-founder of Chrysalis Records in the U.K.) who tries to interview Dylan before a concert is almost painful to see. The poor guy doesn’t stand a chance. Dylan nails him to the wall while strumming his guitar and blowing notes on his harmonica as Alan Price plays piano in the background. But this encounter is almost friendly compared to the way Dylan lays into a Time magazine reporter later in the film. It’s no surprise that he would channel that anger and impatience through songs such as the “Ballad of a Thin Man,” “Idiot Wind,” and the awesome and excoriating “Positively 4th Street.”

I first saw Dont Look Back in San Francisco sometime in ’68. I’d started listening to his music with Bringing It All Back Home (1965). His first four albums, to the extent that I had heard them, were a little too ascetic for my tastes at the time. Dylan needed to go electric to get my full attention, and by the end of a year in which he’d also brought out what might be his greatest album, Highway 61 Revisited, he definitely had it.

Dont Look Back is an incredibly important film, and not just because of its subject matter. 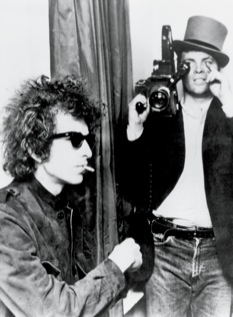 It really felt like something new, raw and rough, with scenes caught on the fly, the camera just observing whatever might happen. It was also the first time I’d ever heard anyone say “fuck” in a film (and not just once, but several times). I was startled, alarmed, and a little frightened, like someone had just gotten punched in the face right in front of me. I’d been seeing movies all my life, but this was something new, and it disoriented me. The scene takes place in yet another crowded suite of hotel rooms. Someone has drunkenly thrown a glass out the window to the street below, and Dylan grows increasingly angry trying to find out who did it. It feels like he’s not playing around, that he’s dropped any pretense and we’re seeing something real.

The second part of this scene, after the disruptive mood has become calmer and relaxed, is an equally important one. Donovan is in the room; we see him watching from the sidelines. Donovan had been lately in the news, heralded as a sort of British Dylan. He’s been on Dylan’s radar from the start of the film; earlier we’ve seen Dylan referring to newspaper articles, saying somewhat jokingly that he’s got to meet Donovan. Now he’s here in the room. Almost shyly he begins to sing his song “To Sing for You.” In the midst of singing, Dylan breaks in and says, “Hey, that’s pretty good, man!” When the song is over Dylan takes the guitar from Donovan and launches into “It’s All Over Now, Baby Blue,” a devastating performance that leaves no doubt as to who the top dog is. The camera lingers on Donovan’s face for a long time, and we know he knows, too. Here’s the scene:

Dont Look Back certainly gained Pennebaker a wider awareness, but he’d been making films since 1953. His first film of record is Daybreak Express (1953), set to the music of Duke Ellington.

Primary, a film he made in 1960 with Robert Drew, Richard Leacock, and Albert Maysles was key to the development of Direct Cinema (or Cinéma vérité). The film, covering John F. Kennedy and Hubert Humphrey’s campaigns in the 1960 Wisconsin Democratic Primary, was a breakthrough in its use of smaller, mobile cameras and lightweight sound equipment, which allowed filmmakers to be relatively unobtrusive and get in closer than they ever had before.

Along with filmmakers Frederick Wiseman and the Maysles Brothers, D.A. Pennebaker was instrumental in creating a style of documentary that didn’t use voice-over narration or interviews, and was more observational. In a 1971 interview Pennebaker said, “…it’s possible to go to a situation and simply film what you see there, what happens there, what goes on, and let everybody decide (what) it tells them about any of these things. But you don’t have to label them, you don’t have to have the narration to instruct you so you can be sure and understand that it’s good for you to learn.” We see this method in the extreme in the films of Frederick Wiseman. Wiseman makes films about institutions, as reflected in titles such as High School (1968), Basic Training (1971), Welfare (1975), Public Housing (1997), and Domestic Violence (2001). The Maysles Brothers, Albert and David, started making films in 1962. Their best-known films are probably What’s Happening! The Beatles in the USA (1964), Gimme Shelter (1970), and the mesmerizing Grey Gardens (1976). David died in 1987, but Al continues to work and has not slowed down much. 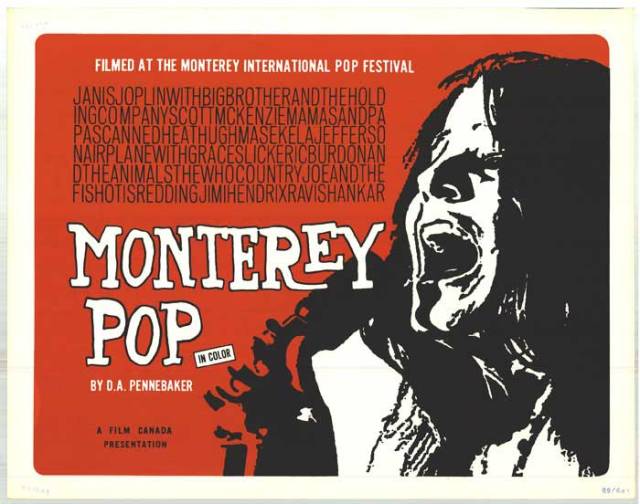 Pennebaker has made many films about musicians over the years, including John Lennon, Little Richard, Jerry Lee Lewis, and David Bowie. In 1967 he filmed the Monterey Pop Festival. Released in 1968, Monterey Pop basically invented the rock concert film as we know it. This was also a time when music had a strong connection to the counterculture. Monterey Pop showcased powerful performances from many artists, including this one from Janis Joplin with Big Brother and the Holding Company (I especially like the cut to Mama Cass Elliott in the audience at the end of the number mouthing “Oh wow!” in reaction). Notice how effectively this clip is edited. 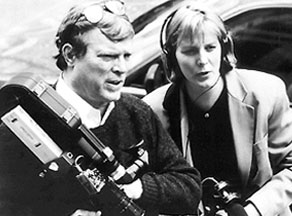 Since 1976 Pennebaker has worked in partnership with Chris Hegedus, co-directing, shooting, and editing films together through their company Pennebaker Hegedus Films. They were married in 1982. It happens that their offices are a block away from where we live on the Upper West Side of Manhattan. For several years now I’ve gotten a kick out of seeing Pennebaker on the street, walking a dog or pushing a cart in our local Fairway grocery store, and having an occasional conversation with him about this or that film. It knocks me out to think of how important he is historically to documentary filmmaking, and at the same time I can see him carrying a bag of groceries. At nearly 88 years of age, and not looking anywhere near it, Pennebaker is still making films, the latest being The Kings of Pastry (2009), which follows French pastry chefs during a 3-day competition to win the prestigious Meilleur Ouvrier de France (Best Craftsman in France) award. It may not have as much resonance as some of the earlier films, but it’s impeccably made and extremely  entertaining. The Kings of Pastry showed me something new that was fun to learn and also made me quite hungry for pastries.

This year D.A. Pennebaker received an honorary Academy Award, a well-deserved recognition of his extraordinary body of work and a life dedicated to filmmaking. It’s impossible to overestimate his importance in this regard. He helped to change the landscape. 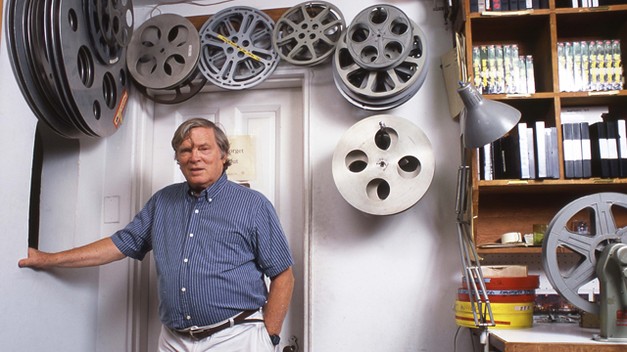 All of the films cited in this piece are available on home video from Netflix and/or Amazon. Of special note is The Criterion Collection DVD edition of The Complete Monterey Pop Festival, a 3-disc set including the feature Monterey Pop (with commentary track by D.A. Pennebaker), Jimi Plays Monterey and Shake! Otis at Monterey (the complete performances of Jimi Hendrix and Otis Redding at Monterey), and 123 minutes of outtake performances. – Ted Hicks

5 Responses to Pennebaker, Dylan, and All the Rest