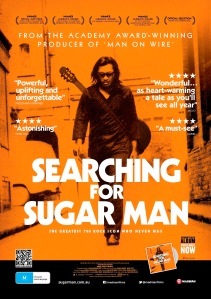 Documentaries have become increasingly viable theatrically, probably since Michael Moore’s Roger and Me (1989) shook things up and pumped new life into non-fiction films. Recent years have seen documentaries playing for weeks, even months, in commercial theaters. 2012 was another good year for documentaries.

Of the ten films on my list of favorites for the year, my two “most favorites” are Beauty Is Embarrassing and Searching for Sugar Man. I’ll go further and say that Sugar Man is one of the best films I saw last year, documentary or otherwise. I put off seeing it for weeks, despite hearing nothing but good things about it from friends and in press coverage. When I finally did see Searching for Sugar Man, I loved it, and was surprised by how emotional it made me feel, and how much I cared for Sixto Rodriguez, aka Sugar Man.  This is similar to my response to last year’s Buck and Bill Cunningham, New York. And Beauty Is Embarrassing just made me smile from beginning to end (and after). I was in awe of  the playful genius and expansive spirit of its subject, Wayne White. All four are films with engaging, charismatic persons as the subjects, seen in artfully made films. – Ted Hicks

This Is Not a Film – Jafar Panahi & Mojtaba Mirtahmasb (Iran)

1 Response to What I Saw Last Year: Best Documentaries 2012