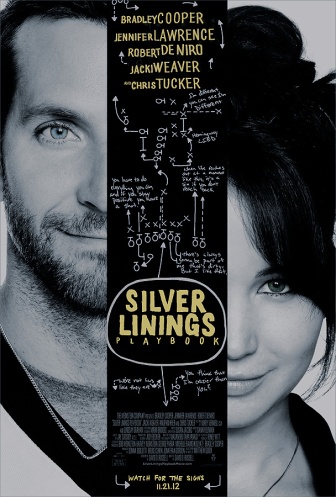 Silver Linings Playbook – Saturday, December 1 at the Crosby Street Hotel screening room. Director/Writer: David O. Russell. Loved it! I was with this film from start to finish. At the risk of overstatement, it felt like there was never a wrong move, never a false step. Silver Linings Playbook is odd and quirky in ways that feel fresh. It’s not your typical romantic comedy, far from it, but it is comic and there is romance. The way it plays out is what makes it special. By the time the end credits started to roll, I felt that it was all of a piece, that everything, the direction, writing, performances, the use of music, all of it, fit together seamlessly.

Bradley Cooper plays Pat Solitano, a teacher in Philadelphia with a bi-polar condition who has spent eight months in a mental health facility. He was sent there as a condition of his plea bargain for a violent incident we learn more about later. As the film begins, Pat is being sprung from treatment by his mother Dolores (Jacki Weaver), who takes him back to the family home. Pat has lost his own home, his job, and his wife Nikki (Brea Bee), who has a restraining order out against him. His father Pat, Sr. (Robert De Niro in a particularly strong performance) is also out of work and running a bookmaking operation in order to earn enough money to start a restaurant.

Invited to dinner by his friend Ronnie (John Ortiz), Pat meets Ronnie’s sister-in-law Tiffany (Jennifer Lawrence), who has problems of her own. A high point of the dinner scene is when Pat and Tiffany start comparing anti-depressant meds they’ve both taken. Cooper and Lawrence have great chemistry together. Their scenes are a real pleasure to watch, largely because of the way they play their characters’ unpredictable behaviors, which threaten to derail things at any given moment. Despite Pat’s constant delusional talk of how he plans to win Nikki back, his developing relationship with Tiffany is at the core of the film.

Pat’s father is a major Philadelphia Eagles fan. His bookmaking operation rises and falls on the team’s wins and losses. Pat, Sr. was banned from the Eagles’ stadium for getting into fist fights with opposing fans. He’s extremely superstitious, more than a little obsessive-compulsive, and convinced that he can’t lose if his son will watch the televised games with him, that this will bring good luck. But by now Pat has reluctantly agreed to train as Tiffany’s partner in an upcoming dance competition, in exchange for Tiffany getting a letter to Nikki. This comes to a head when his father asks Pat to attend an Eagles game he has placed a huge bet on, but which conflicts with Pat’s dance practice. (I won’t go further into the storyline; it’s best to see how it plays out yourself.)

Bradley Cooper is an actor who impresses me more every time I see him. Silver Linings Playbook is his third film released this year, after The Words and the underrated Hit and Run. He was excellent in last year’s Limitless, his first time working with Robert De Niro. In the two Hangover films (2009 & 2011), Cooper was a solid, straight-faced presence, grounding the films in something like reality, in spite of their absurd, outlandish (and quite funny) events. An actor with his looks, which remind me somewhat of Paul Newman, has to be careful not to end up in one clichéd rom-com after another. This seemed to be happening to Matthew McConaughey until he broke the pattern with The Lincoln Lawyer last year, followed in short order by Bernie, Killer Joe, Magic Mike, and The Paperboy. Hopefully Bradley Cooper will continue to make smart choices as well. His performance in Silver Linings Playbook is bringing him a lot of well-deserved attention.

Jennifer Lawrence landed on the map two years ago with her performance in Winter’s Bone, which resulted in an Oscar nomination for Best Actress. With the lead role in The Hunger Games this year she’s shown that she can carry a big-budget film as well as “smaller” films. She’s more than a match for Bradley Cooper in Silver Linings Playbook. It’s hard to imagine anyone else in either of their roles.

All of the performances feel totally right to me. The characters come off as real people. It’s especially gratifying to see De Niro in a more nuanced role than the character he’s played in the Meet the Fokkers films, for example. There are some amazing ensemble scenes in Silver Linings Playbook with half a dozen or more characters all active at once. It’s a tribute to David O. Russell’s talents as a director, as well as the actors, that these scenes work so well. He scored heavily with his previous film, The Fighter (2010), which received Best Supporting Actor & Actress Oscars for Christian Bale and Melissa Leo, as well as nominations for Best Picture, Director, Writing, and Editing. His other films include I Heart Huckabees (2004), Three Kings (1999), and Flirting with Disaster (1996).

Music is also a crucial element in Silver Linings Playbook. David O. Russell wrote in the liner notes to the soundtrack album that the music “is essential to the heart and soul of this film.” When music is well used, as it is here, it doesn’t tell you what to think or feel, but it does make the scenes stronger. The music makes the film better, and the film makes the music better. From Stevie Wonder’s “My Cherie Amour,” the song played at Pat and Nikki’s wedding that sends him into a frenzy whenever he hears it (or imagines he hears it), to the Bob Dylan/Johnny Cash duet on “Girl From the North Country” from Dylan’s “Nashville Skyline” album, to an incredible song, “Always Alright,” by a group I’d not heard of before, Alabama Shakes, which kicked in as the end credits began, and sealed the deal on the feeling that I’d just seen something special.

The Independent Spirit Awards nominations were announced last week. Silver Linings Playbook is up for Best Feature, Director, Screenplay, Female Lead, Male Lead, and Supporting Female. I know we’re about to be buried in an onslaught of nominations by a seemingly endless number of different awards groups, but these Spirit Awards nominations for Silver Linings Playbook make me feel that I’m not delusional for liking this film as much as I do.

The films I’ve referenced here, with the exception of Hit and Run, are currently available from Netflix and/or Amazon. – Ted Hicks

Iowa farm boy; have lived in NYC for 40 years; worked in motion picture labs, film/video distribution, subtitling, media-awards program; obsessive film-goer all my life.
View all posts by Ted Hicks →
This entry was posted in Books, Film. Bookmark the permalink.