Seeing Movies with an Audience

One of the great pleasures of this year’s New York Film Festival was a special showing of The Princess Bride (1987). The film has developed a strong following in the 25 years since its initial release, though I didn’t realize just how strong until seeing it in a sold-out auditorium filled with fans who clearly love the film, anticipating all the great scenes and dialogue. The Wizard of Oz (1939) was invoked several times during the introduction and discussion that followed. My first reaction was that Oz is an established classic, but is The Princess Bride on the same level? It continues to connect in a very real way with successive generations of filmgoers since its release, so maybe it is. There’s even a special edition of  Monopoly keyed to the film. What more proof do we need? 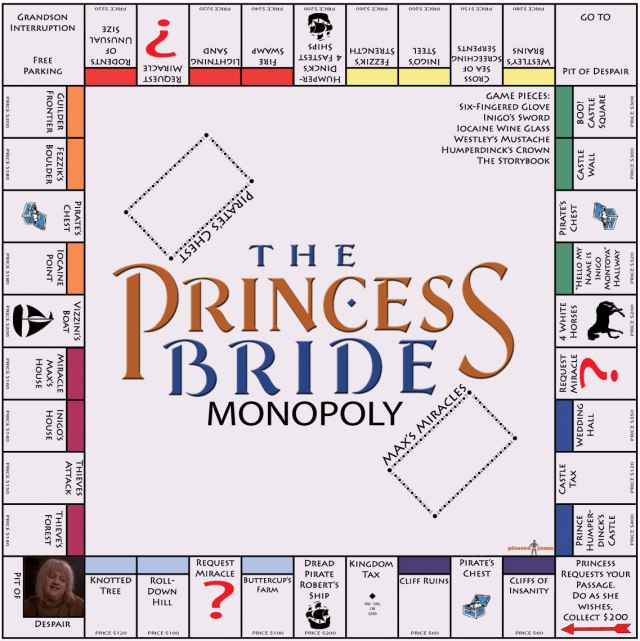 The NYFF screening was especially exciting because director Rob Reiner, writer William Goldman (author of both novel and screenplay), and most of the cast, including Billy Crystal, Carol Kane, Robin Wright, Cary Elwes, Mandy Patinkin, Wallace Shawn, and Chris Sarandon were introduced onstage before the film and returned for a lengthy discussion after.

I was surprised by the rush I felt in seeing all these people together onstage, after just seeing The Princess Bride for only the second time since 1987. Part of that was seeing all this star power breathing the same air as I was. But it was also because I realized I really loved the movie, and here were the people who had made it. Plus they were incredibly entertaining as they reminisced, especially Billy Crystal, no surprise there.

I’d forgotten much of the film, but the scene that had stayed with me all these years was of Mandy Patinkin’s character, Inigo Montoya, finally avenging the murder of his father by the six-fingered man (Christopher Guest). It’s simply thrilling, and quite emotional.

You could really feel the anticipation and enthusiasm in the air before, during, and after this showing. It got me thinking about the shared experience of seeing movies with an audience in a movie theater, and how that is markedly different from watching films at home on DVD or a computer.  I had a dramatic example of this a few years ago when I first saw Little Miss Sunshine (2006) in a small screening room with only three or four other people. When the film was over I remember thinking that it was okay, but nothing special. A month or so later I saw it with my wife in a crowded theater at a local multiplex. This time I thought it was great! Same movie, so what had changed? I’d been swept along with the reaction of an audience that was totally tuned into this quirky comedy, and laughed a lot. Laughter is contagious, almost impossible to resist. But now I was seeing Little Miss Sunshine in a different way than I had before. Comedies especially benefit from being seen with an audience.

In 2010 we attended a 30th anniversary screening at the Walter Reade Theater of Airplane! (1980), one of the most gloriously demented films ever made. No one is likely to compare Airplane! to The Wizard of Oz, except for the loyalty they both inspire in their audiences. It’s the same with Young Frankenstein. My wife and I frequently toss quotes back and forth from that film. (“Put. The. Candle. Back!”) Airplane! had a packed house, an audience totally familiar with the film from start to finish. I was quite happy and rather amazed to find that the film totally worked 30 years later. It was just as funny now as it had been when I first saw it. The audience reaction convinced me of that. Airplane comes from the school of throw everything at the wall and see what sticks. A surprising amount of it does.

Conversely, it’s interesting to see a really bad movie with an audience that seems to feel the same way as you do about it. A prime example of this is when I saw Brian De Palma’s Mission to Mars (2000). It’s hard to convey how stunningly bad this film is. De Palma is a director I usually don’t care for. But I’ve loved science fiction in all forms since I was a young boy, so I was interested in this. Mission to Mars had a big budget and a good cast (Tim Robbins, Don Cheadle, Gary Sinise).  I don’t remember much about it, except the certainty, perhaps delusional, that the entire audience was seeing it as I was. Mission to Mars was dying before our eyes, sucking the air out of the theater, leaving a bad smell. You could feel the audience discomfort. I imagined we were all embarrassed for having had to witness this. Except, of course, that we chose to. If it was that bad, why did I stay? It’s hard for me to leave a movie before it’s over, no matter how bad. It feels like I’ve somehow failed if I don’t go all the way with it. And if I didn’t leave Mission to Mars or something like Eat Pray Love, I’ll obviously stay for anything.

Sometimes you can be with the wrong audience. Earlier this year I saw a violent action film, The Raid: Redemption (2011) at the Museum of Modern Art as part of the annual New Directors/New Films series. The Raid concerns an elite police squad trapped in a rundown apartment building controlled by a local mob boss in Jakarta.  They have to fight their way out against overwhelming odds by any means necessary. This involves extreme violence, each encounter more inventive and outlandish than the last. I like films like this when they’re well done, and The Raid definitely had my attention at the outset. But then the audience reaction to the violence began to get in the way. They were laughing hysterically in a way that made me very uncomfortable, as though every bit of violence was a punchline. I also felt a disconnect because of the venue, MoMA, where you expect to find “serious” filmgoers. This has happened to me once or twice before, where the audience reaction makes me examine my relationship to what’s up there on the screen. I usually stop before I reach any conclusions, because I really don’t want to give up seeing these kinds of films. I didn’t want to see myself as part of that crowd in any way, yet there I was. This was a case where I would have been much better off seeing The Raid by myself. Being with this audience worked against me.

The viewing experience is changing, and has been for some time. Computers and iPhones are now viable delivery systems. I never thought I’d be willing to watch a movie or TV show on a computer screen, but I can do it, and quite easily,  as it turns out. Though my preferred way to see a movie will probably always be in a theater with other people (as long as they don’t talk, or text, or otherwise get between me and the screen).

There will always be movies (I hope). There will just be different ways of experiencing them. Are we missing something by watching a movie on a tiny screen rather than seeing it in a theater? I think so, but since there are so many more venues now, maybe films will be seen that might otherwise would not get distribution. That said, I hope that no one’s first experience of Lawrence of Arabia or 2001 or Apocalypse Now is on an iPhone screen. In any event, movie theaters aren’t going away anytime soon, and people are still attending. Last weekend I saw Skyfall on Friday and Lincoln the next day at the AMC Loews Lincoln Square, a 13-screen multiplex on Broadway near Lincoln Center. The theater was jammed with people. And this was for matinee showings. There’s just something about being with an audience in a theater when the lights go down and the movie starts. At this point, I sometimes say to my wife, “See you later.” I’m by myself with the film, but also with the audience. Nothing can replace it (until it does).

Here’s a great clip from Sullivan’s Travels (1942). I think it illustrates everything I’ve been talking about here. – Ted Hicks

7 Responses to Seeing Movies with an Audience