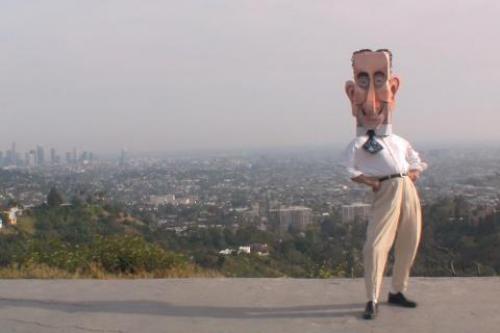 Beauty Is Embarrassing – Saturday, September 8 at the IFC Center. Directed by Neil Berkeley. This is great! Do I mean it’s “great” like  Citizen Kane or Children of Paradise? No, of course not, but I know I loved it. It made me feel good. I was moved and surprised, and I had a smile on my face almost from the start. I think that’s pretty great. Beauty Is Embarrassing is a new documentary about the life and career (which are basically one and the same) of Wayne White – artist, puppeteer, sculptor, performer, painter, and a very funny guy. I’d not heard of him before, but he was a three-time Emmy winner for his work on Pee Wee’s Playhouse, which I’d watched religiously in the 80s. His cartoons and illustrations also appeared in The New York Times, The Village Voice, and Raw. I’ve still got nearly all the issues of Raw, so I’d been exposed to his work without knowing who he was.

I’m so enthusiastic about this film that I want to get word out now. I’m going to bang this post out as fast as possible, more of a newsflash than a review. Here’s the trailer, which I think gives a good sense of the film:

Wayne White grew up in Chattanooga, Tenn., where, according to his mother, he began drawing at a very, very young age. He moved to New York City in 1981 to try his hand at cartooning and puppetry. He eventually became heavily involved in Pee Wee’s Playhouse, and when Paul Reubens moved the show to Los Angeles, White went with it.

He eventually got involved in painting, but with a somewhat different approach. Wayne White buys generic landscape paintings from thrift shops, then works 3D-style words and phrases into the picture. Here’s one of them. In the film you see a lot more of this, how he does it, and in the process overcame the established art world’s stuffy resistance to art that could be fun and make people laugh.

Wayne’s wife, Mimi Pond, is a successful graphic artist (as well as writing the very first Simpsons episode in 1981, “Simpsons Roasting on an Open Fire”). They have a son and daughter who have artistic aspirations of their own. One of the greatest things in the film is watching White and his son construct a large (about a yard in height) Lyndon Baines Johnson puppet head, and then seeing White wearing the head and dancing on a hill overlooking downtown Los Angeles in the distance. There’s something so free, joyous, and ridiculous about this, that at this point I absolutely fell in love with Wayne and the film itself.

Here’s something more about Wayne and his work. Some of these shots are in the trailer, but this goes a little further.

Finally, here’s a photo of a really big head of George Jones that Wayne installed in a gallery at Rice University in Houston, Texas in 2009. Like so much of the incredible stuff Wayne White comes up with, seeing this makes me feel like a little kid confronted with something magical and wonderful. 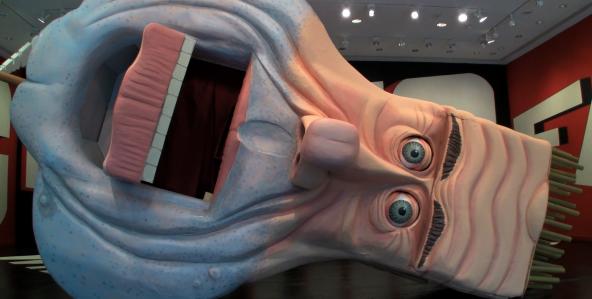 Wayne White comes across as thoughtful, self-deprecating, very self-aware, and extremely entertaining to listen to. Here are some things he said that really got my attention:

“Humor is the most important thing we have.”

“Art can be fun. It can be a big part of your life that never ends.”

“Do what you love. It’s gonna lead to where you want to go.”

By now you probably get the idea that I like this film. This is a very well-made documentary. It reminds me of others I’ve especially liked that are almost invisibly constructed around strong, charismatic people. Beauty Is Embarrassing is scheduled to run at the IFC Center here in New York City only through September 13th. I don’t know what kind of distribution is planned for the film elsewhere, though it’s not likely to be in multiplexes. Just try to see it if you can, even if you have to wait for DVD. I guarantee you’ll like it.  – Ted Hicks

1 Response to Just Saw Something Great!