Monday, April 30. The Raven at AMC Loews 84th Street. Directed by James McTeigue (V for Vendetta, 2006). Not so good. John Cusack is credible as Edgar Allan Poe spending the last several days of his life trying to track down a serial killer who is using Poe’s stories as inspiration. Cusack is a very good actor, and I would like to have seen him as Poe in a better movie. This one is all over the place. I saw it a week ago, and I can’t even remember what the killer’s motivation was. Brendan Gleeson is good as the antagonistic father of Poe’s love interest, as is Luke Evans as a Baltimore policeman employing some pre-CSI forensic methods, and there is some interesting atmosphere from time to time. But that’s not enough, I’m afraid.

Wednesday, May 2. Bonjour Tristesse (1958)at Film Forum. Directed by Otto Preminger. Didn’t like it as much as the first time I saw it, but it’s still a very interesting film. Starring Jean Seberg (a very strong presence in her second film role) and David Niven as her playboy father, with Deborah Kerr as the woman who threatens to upset their free-living life style on the French Riviera. This is a DCP (Digital Cinema Package) restoration, so the picture is clean and crisp to an almost surreal degree. Showing at Film Forum in NYC through Thursday, May 10. Also showing on TCM on Sunday, June 17 @ 10:00 am EST.

Thursday, May 3. I Wish at the Broadway Screening Room. Director/Writer: Hirozaki Kore-eda, 2011. This Japanese film is wonderful. Koichi, 12 years-old, lives with his divorced mother and grandparents, while his younger brother Ryu lives with their father many miles away. Koichi’s efforts to see his brother and reunite his parents motivate the story. I liked the film from the start, but it really kicked in for me at about the half-way mark, and then I was totally with it. An active volcano, a new bullet-train line, and the kindness of strangers play important parts along the way. I Wish opens this Friday, May 11 in New York and Los Angeles. The performances are amazing. I can’t recommend it enough. 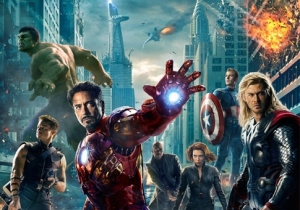 Friday, May 4. The Avengers at AMC Loews 84th Street. Director/Co-Writer: Joss Whedon. It’s a little unwieldy at times, but I basically loved it. Joss Whedon was the main draw for me, as I’m a big fan of his TV work,  especially Buffy the Vampire Slayer. He’s great with dialogue and messing with genre expectations in very inventive ways. The strongest parts of The Avengers — more so than the action set-pieces — are when this mismatched group of superheroes, and the egos and anxieties they bring with them, are just standing around talking. Whedon can take what would be otherwise preposterous situations and make them believable through dialogue and real emotions. Okay, I know we’ve been overrun by too many comic book superhero movies with increasingly elaborate special effects, but this one is definitely several cuts above the rest. See it, and add to the $200 million dollars it’s already taken in this weekend. P.S. The end credits go on for a very long time, and you’ll want to leave before they’re over (as I nearly did). But try to hang in all the way through, because there’s a really great scene tagged on at the end. Trust me, it’s worth it.

Saturday, May 5. Marnie (1964) at the IFC Center. Directed by Alfred Hitchcock. Didn’t like it when I saw it in ’58, and seeing it again has done nothing to change my mind. Hitchcock has made some truly great films (Vertigo, Shadow of a Doubt, and Psycho, to name but three), but I think Marnie fails badly. Seeing Sean Connery in the midst of his James Bond career has its interest, but the psychology of the film is simplistic and heavy-handed. Not to mention Hitchcock’s penchant for obviously painted backdrops and rear-projection during scenes of people driving in cars and horseback riding. I know this was a common practice in the past, but its really distracting in this film. On the plus side, the digital projection makes it look like it’s brand new. That’s not enough reason to see it, though. But if you must, the Museum of the Moving Image in Astoria is showing it on the big screen on Saturday, May 12 @ 2:00 pm.